All collectors end up with unusual items in their collections, items other than that which they mainly collect but which relate to their collection in some way. I have a selection of signed photographs in my collection which I picked up alongside signed postcards. I have an interest in all things TV, FILM and Philatelic related, so I do have a mixed collection of ephemera. So, I have decided to place a few bits and pieces here. This will include some photographs I have taken which may have a 'postcard' connection. These could, and some will, be placed on the main webpage, but without some other connection there are some which probably belong here. 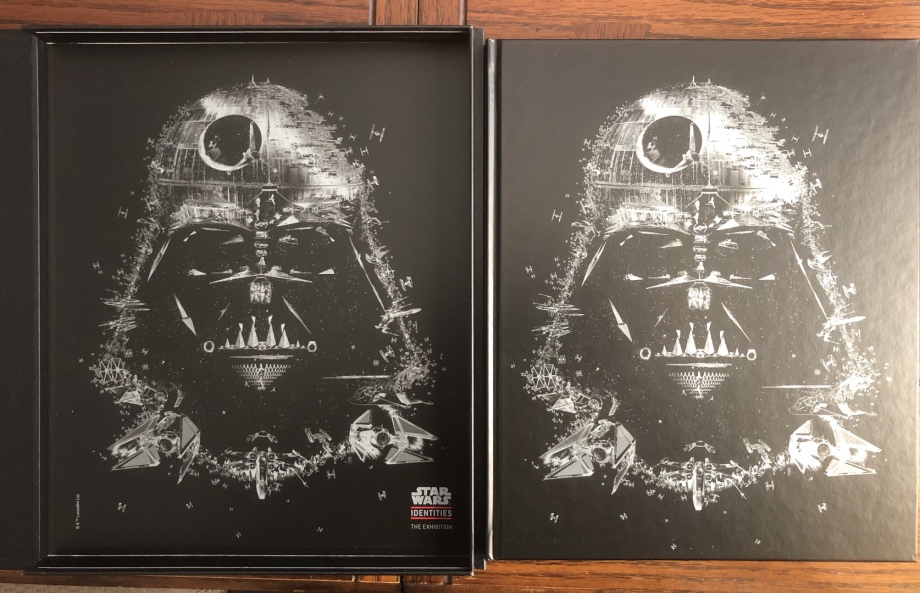 The Exhibition at the O2, LONDON

I visited this fantastic exhibition on the 6th May 2017 (the exhibition closed on the 3rd September 2017). For any Star Wars fan this was a must do exhibition and I loved it. I decided that I liked the look of the exhibition souvenir boxed hardback book. I became even more enamoured when I noted that this boxed book came with a large print of the Darth Vader exhibition artwork. 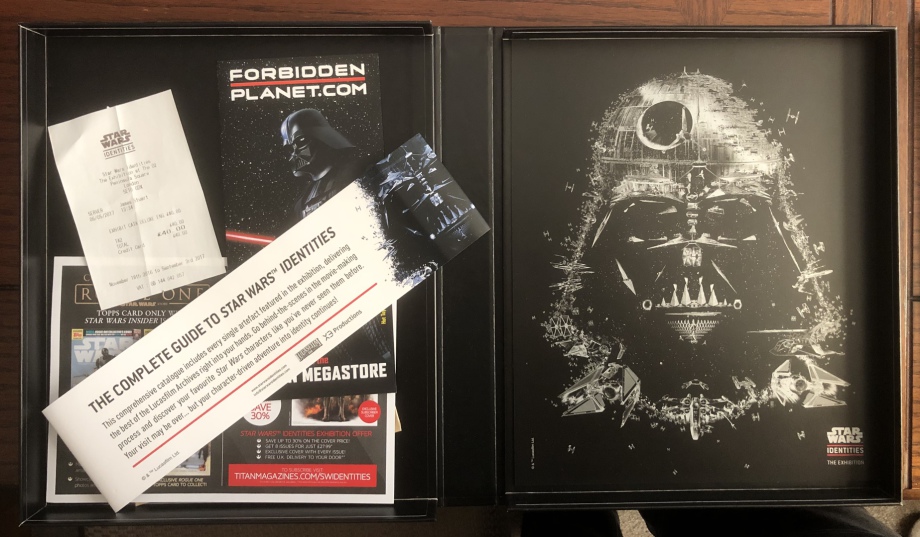 THE INSIDE OF THE BOX

WITH THE LARGE PRINT ON THE RIGHT SIDE

On the left side you can see the band that went around the box holding it closed (I kept this and placed it inside my box) along with some promotional material that was available at the exhibition which I collected and keep in the box as well. There is also the receipt for the book which I keep to reminds me just how expensive this book was - £40 [YES! £40, but it is a great book – it kind of needed to be at this price – but also, as a fan it makes a great souvenir of my visit to the exhibition and it is a book which is now extremely hard to source and much more on the second hand market, so perhaps it was not such a bad buy at the price after all] 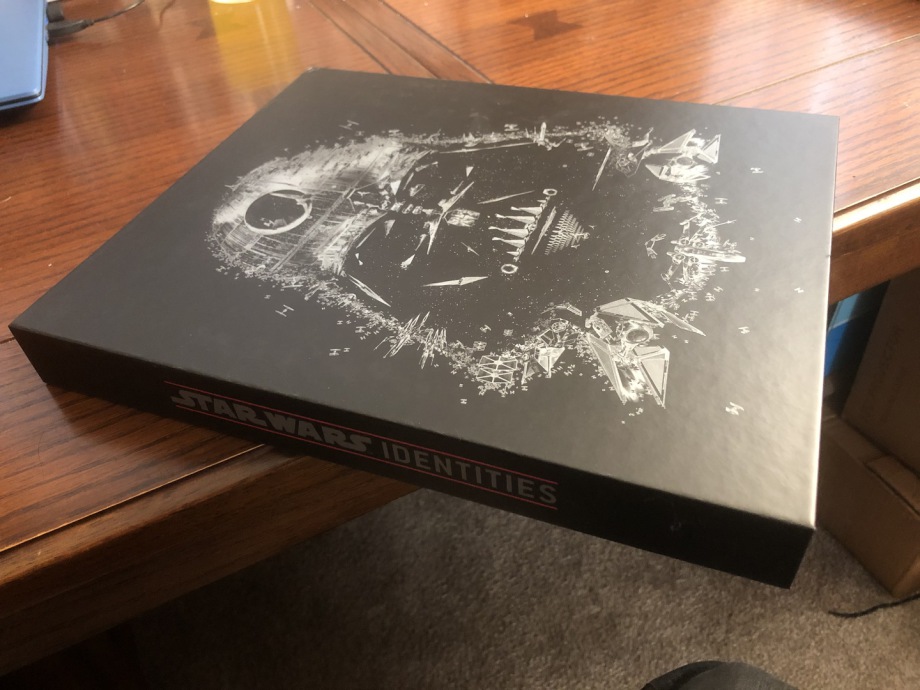 SIDE VIEW OF THE BOX

The Book and Print are contained within this special box 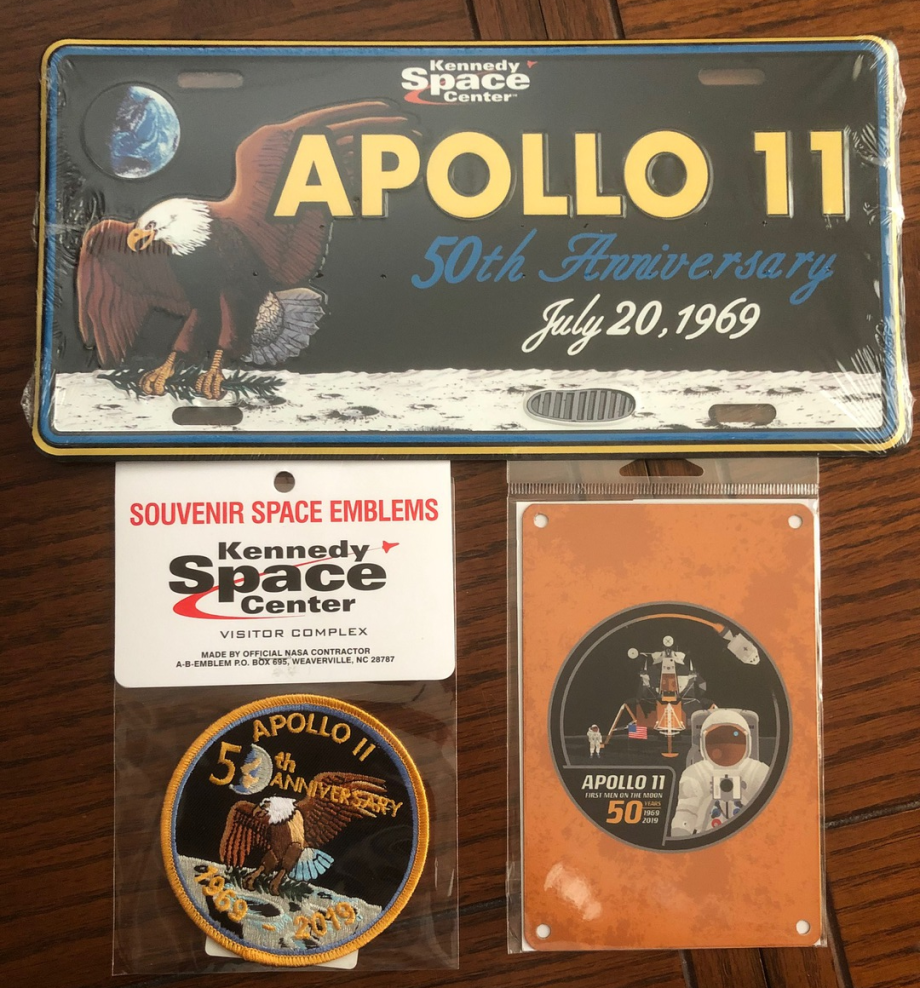 Last year I covered the 50th anniversary of the Moon Landing and Apollo 11 with a countdown to the anniversary date with lots of postcards depicted on the main webpage and the addition of some of my mounted display sheets under a separate tab ‘MOON LANDING The Apollo Story’.

Last year I also got to visit the Kennedy Space Center in Florida, somewhere I enjoy walking around and taking the bus tour. There were some nice souvenirs available, but I was concentrating on the postcards, well the cheaper ones, so I missed out on buying the expensive 50th anniversary items, but, I am lucky enough to have a wife who was looking to buy me some interesting Christmas presents. She picked out some great items and on Christmas Day this is what I got:

Only one of these items is a postcard, but they are all very collectible with what I expect is a short production period as I think they will not make any more now that 2019 has passed and we are outside of the 50th anniversary celebrations and commemorations. 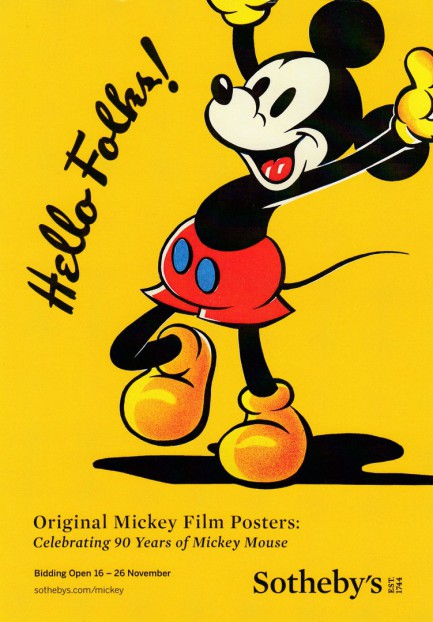 This was originally a free card, but I had to buy my copy from eBay, it cost me 99p. I love Disney related cards, and although this is not a postcard it is still a great ‘card’, and Disney themed collectible (I suspect the auction would have been fun as well as I love old Disney film posters and have many of them depicted on postcards in my collection) 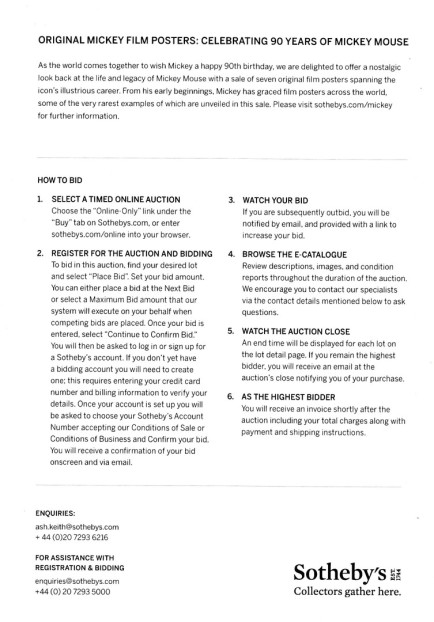 REVERSE SIDE OF ABOVE CARD 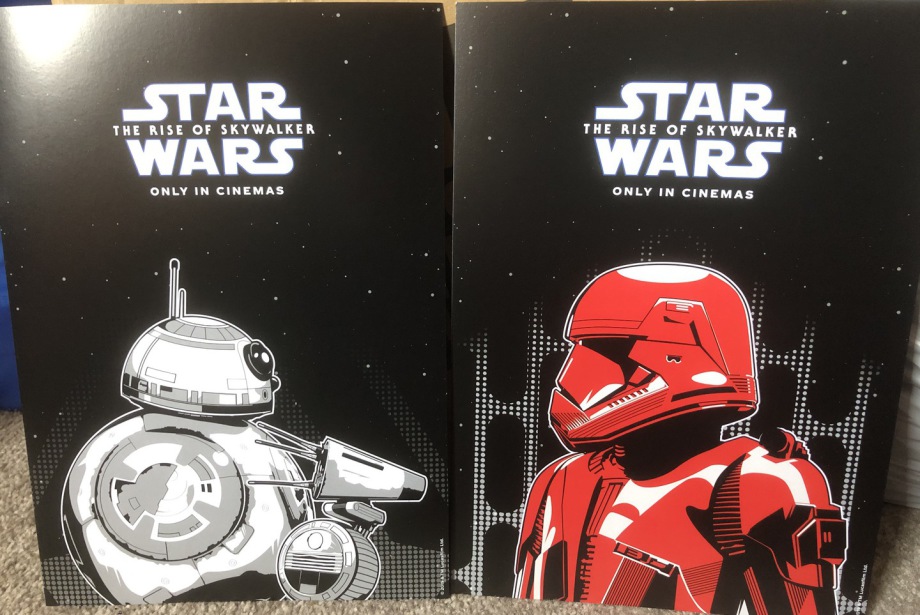 STAR WARS: THE RISE OF SKYWALKER

These large poster cards were given away to anyone ordering a Coca-Cola drink from the cinemas counter service. I saw the film on Christmas Eve and managed to pick up two of these large posters and I will be putting mine with my Star Wars postcard collection. 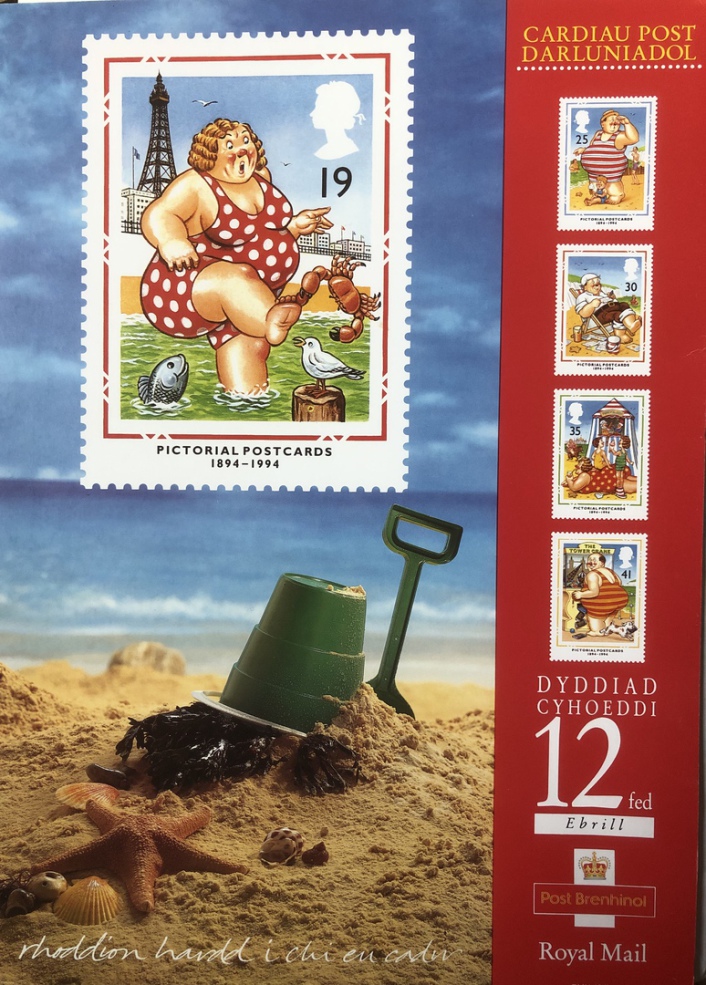 There was a time when you saw these posters hung up in every post office, either on the counter or in the glass panes of the counter. During the 1980’s and 1990’s they were very prevalent, but despite still being produced you don’t see them so much. I have a number of these, mainly, but not exclusively, the stamp sets related to any aspect of Television. 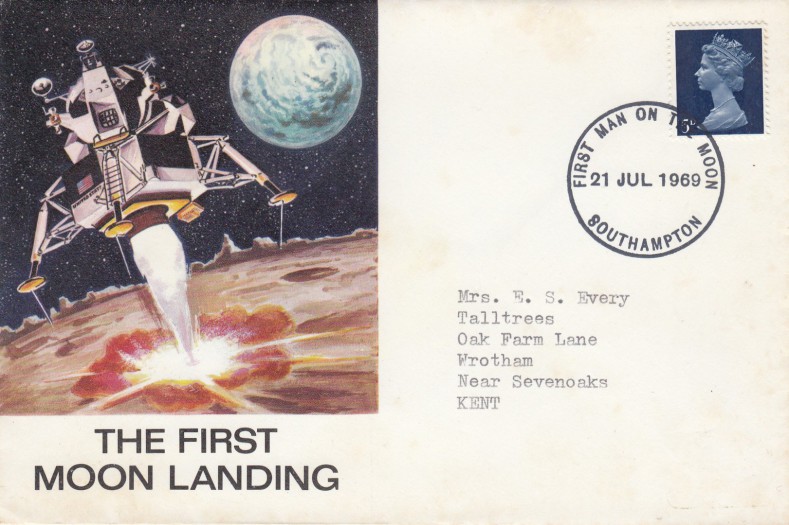 Used with the special ‘FIRST MAN ON THE MOON – 21 JUL 1969 – SOUTHAMPTON’ commemoration cancellation. A recent addition to my Apollo 11 themed collection. This was just £1 and worth every penny. 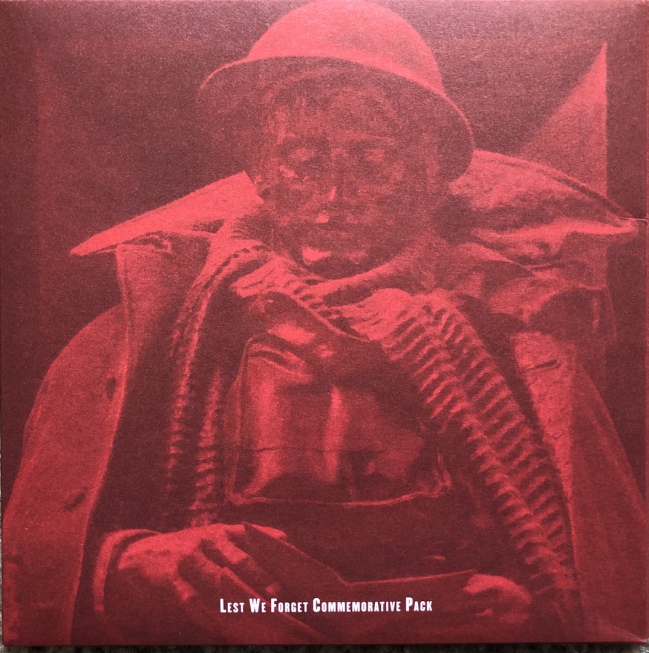 This was a package which contained a large folded card item which when unfolded represents the shape of a cross. The inside pages of this cross contain the three World War 1 commemorative sheets relating individually to the battle of the Somme, Passchendaele and the Armistice, issued by Royal Mail. These sheets are mint. There are also three poppy art stamps stuck down to one of the pages and cancelled with an exclusive cancellation: THE GREAT WAR ARMISTICE – 11.11.11. – ROYAL MAIL LONDON SW1 – 11.11.08.

There was also one other item unique to this pack, and this was my reason for buying it, and this is a facsimile looking silk embroidered poppy postcard, but this ‘particular’ design is unique to this package’s postcard. The postcard is sleeved on the centre page of the unfolded cross. The below photographs show images of the contents of this page, limited to 5,000 copies. 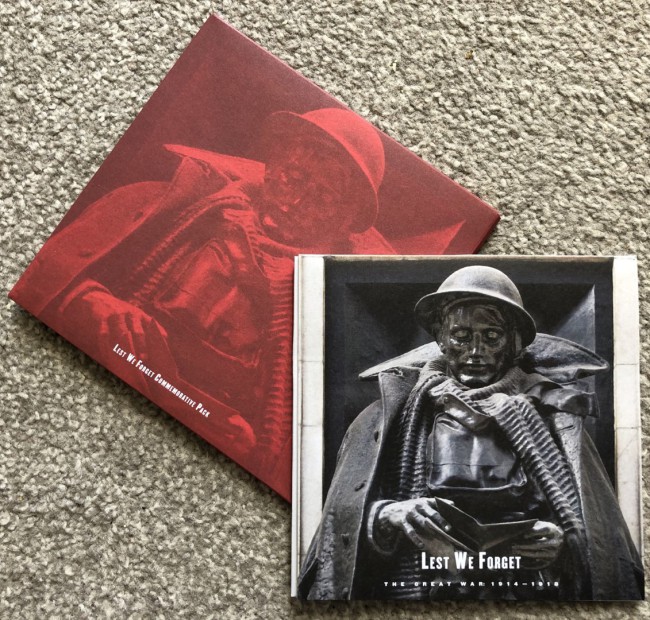 The outer red cover and the folded cross interior package 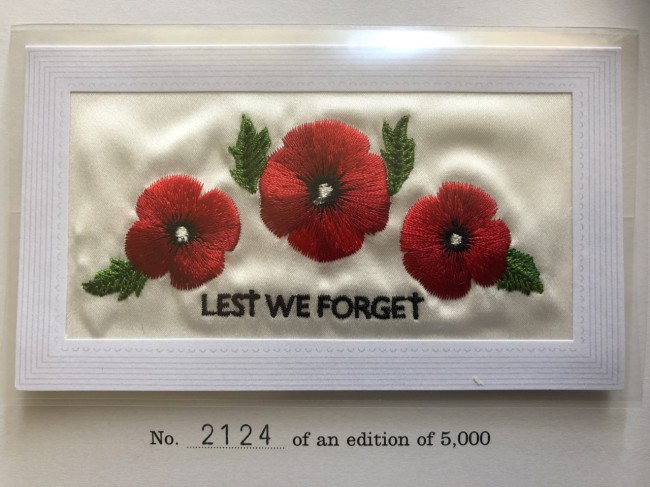 The central embroidered poppy postcard - a unique design exclusive to this pack. My copy is number 2124 of a limited edition of 5,000 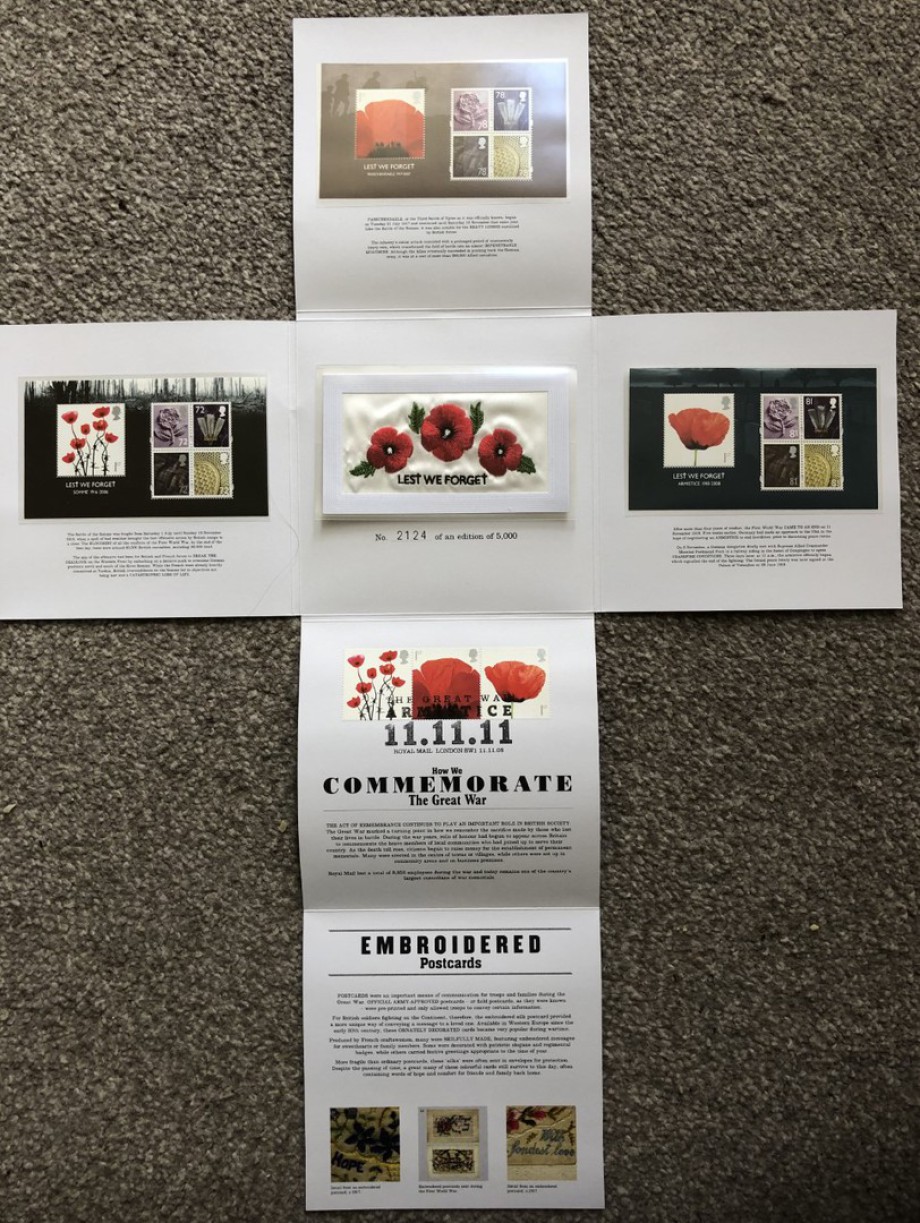 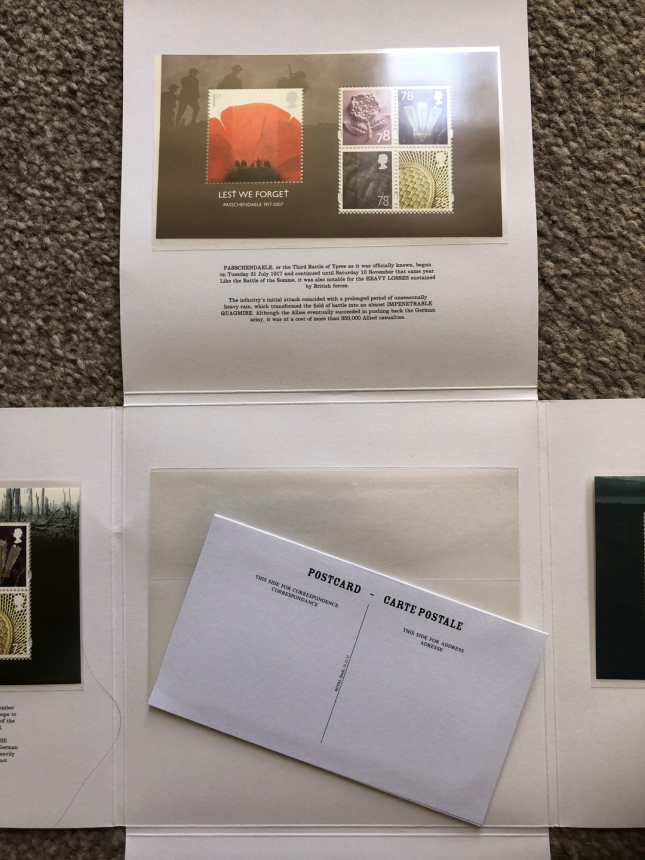 One of the stamp sheets and the central postcard which has been removed to show the reverse side - this is a true postcard with a full printed postcard reverse. 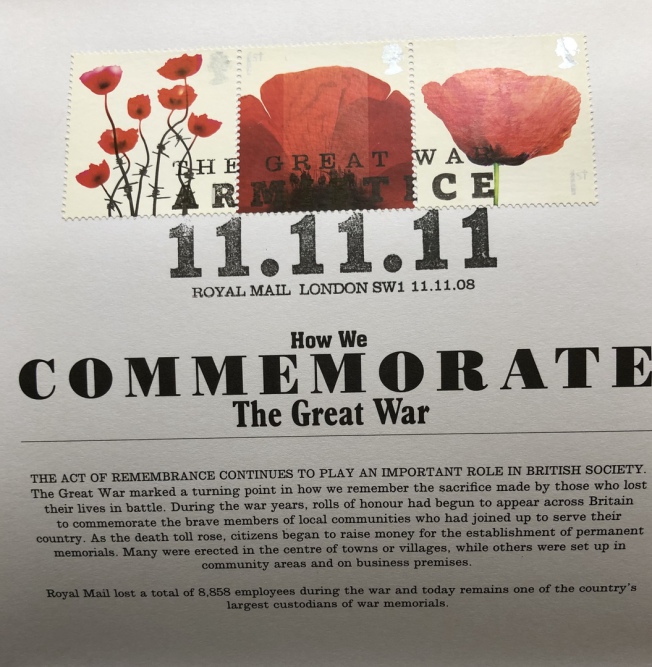 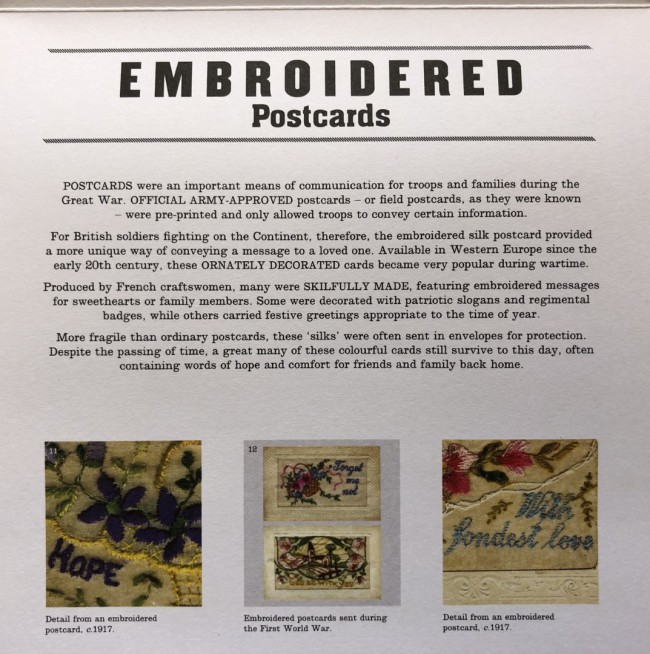 Information Page from pack - story behind the Embroidered postcards

There are a whole range of fantasy bank notes out there covering everything from cartoons characters, film characters and TV characters like this Dr Who one. This one is recent as it includes the new female doctor. These are quite cheap and make a good addition to a mixed ephemera collection. 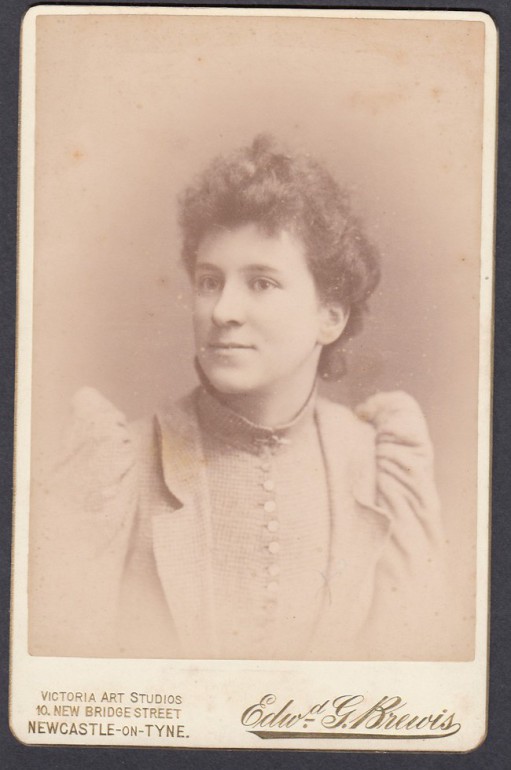 These larger, larger even than old postcard size, being 108mm x 165mm, Cabinet cards are a much larger version of the Carte De Visite’s that I previously posted below. In-fact these Cabinet cards displaced the Carte de Visite in popularity in the 1880’s. Originally they were both albumen prints attached to card although clearly here with the cabinet cards these were much larger. The cabinet cards also far more commonly had quite elaborate and detailed reverse sides, often adverts for the company, photographer or studio that produced the cabinet card in question. Although the carte de visite were used almost exclusively for portraiture these Cabinet Cards were initially used for landscape views before the format was adopted for portraiture.

Again, I like to hunt down more interesting reverse layouts, but I have even less of these than I have of the carte de visite type.

This one here was another weekend buy at Woking. 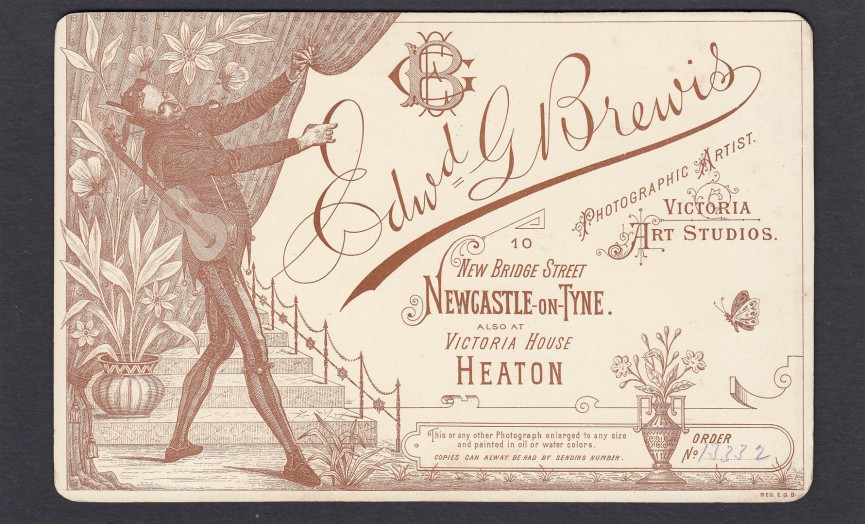 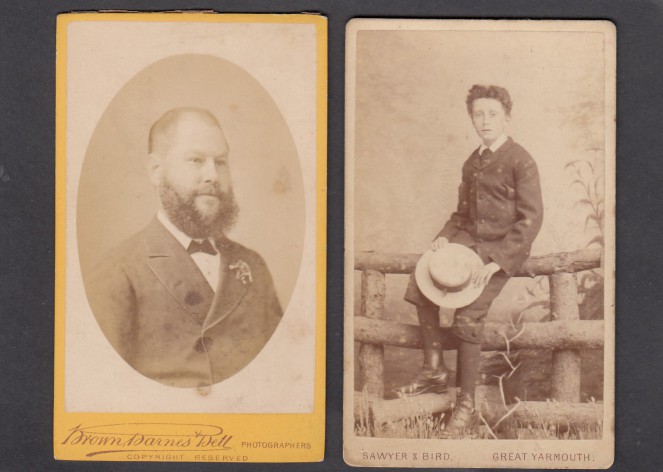 These were a type of small photograph which were patented in Paris by photographer Andre Adolphe Eugene Disderi in 1854. These were constructed by the simple method of taking a photograph (of a type called then an albumen print) and sticking, or mounting, this on a thicker piece of card. The photographs were normally 54mm x 89mm and they were mounted on a piece of card roughly 64mm x 100mm. These pre-date the postcard in their origin, but they continued well into the time of postcards and are in some way a lead in to the production of pictorial postcards as many of the photographic companies which produced these were the ones which went on to print local postcard scenes and to produce postcard portraits of singles (especially soldiers at the start of WW1), couple and families.

Many of these are plain backed, but a number were also produced with quite elaborate reverse designs and these are the ones that I like, although I only have a handful. Depicted here are a few which I picked up at the weekend Woking Fair. These were £2 each (but I got the six for £10). 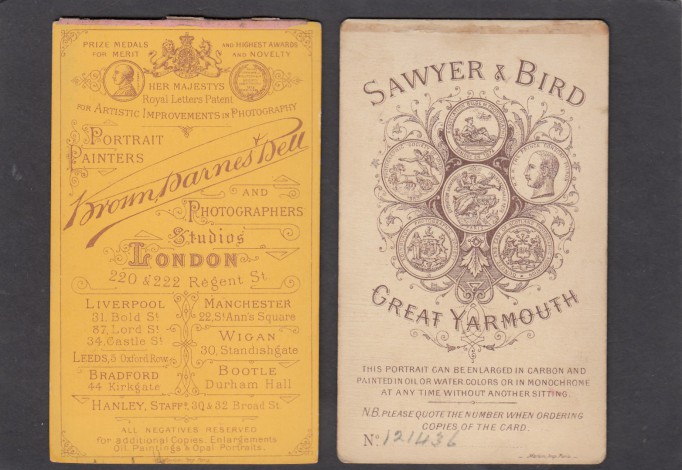 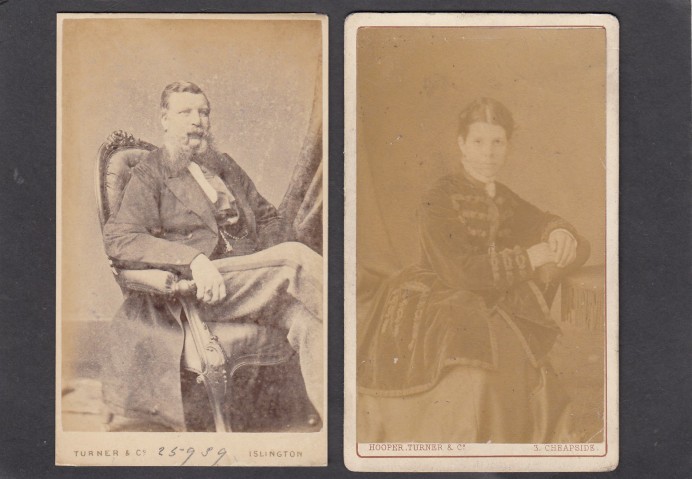 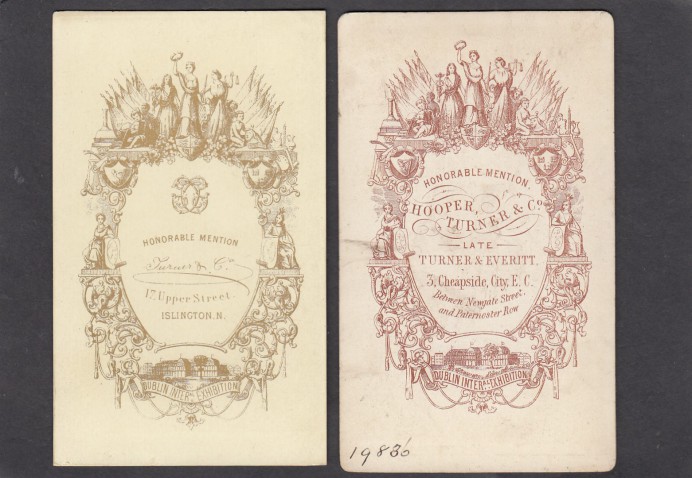 Both these reverse sides make mention of the Dublin International Exhibition. So, these items would also be of interest to those who collect early Exhibition material. 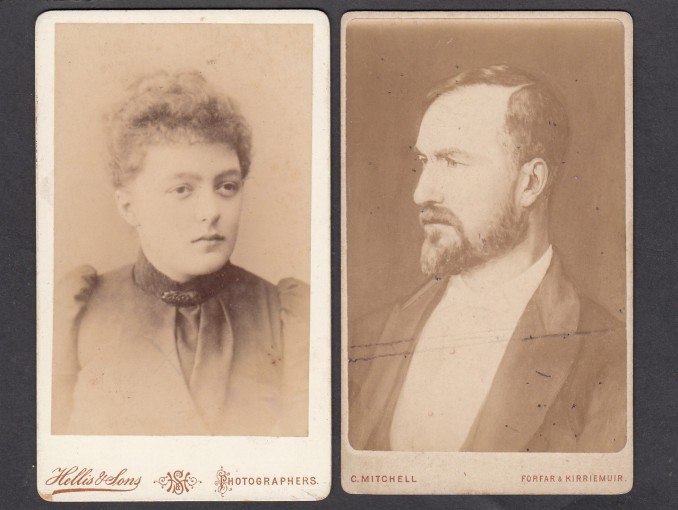 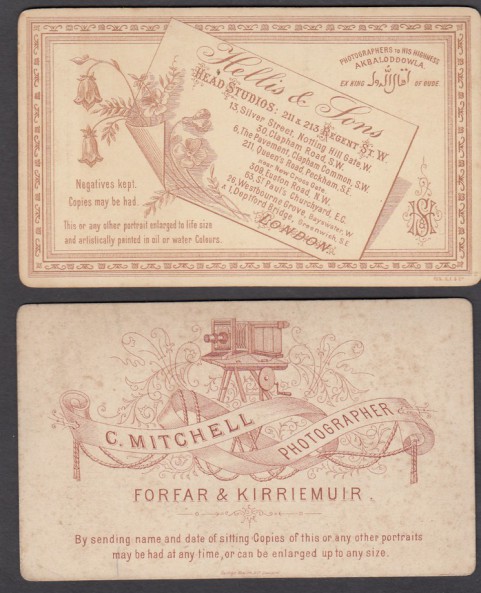 These two backs are my favourite, with the camera one being the best I have in my collection, in my mind. 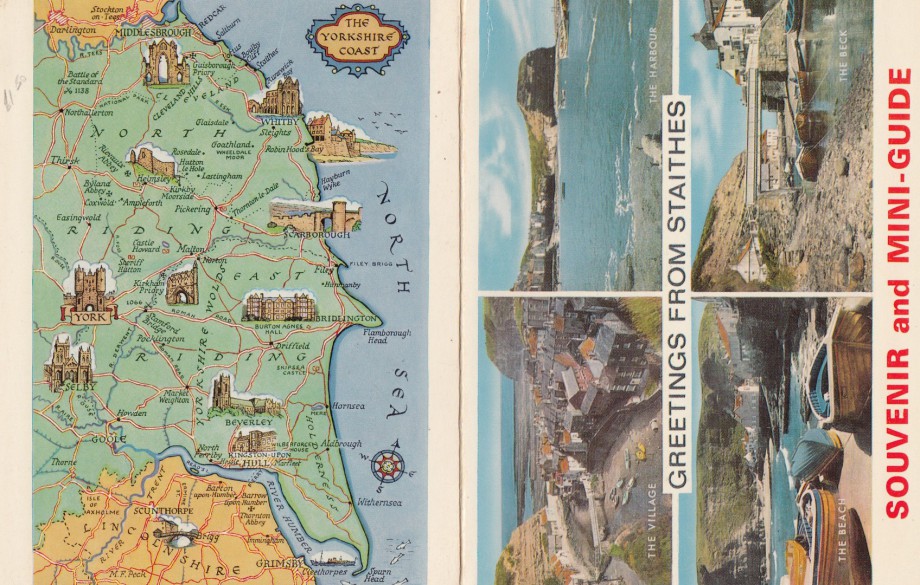 These mini-guides were published by the postcard publishing (at least until last year) company J. Salmon Ltd. Although not a post their connection with the company, and the fact that the two images used on this folded card are both postcard images, makes these a nice bit of connected ephemera. 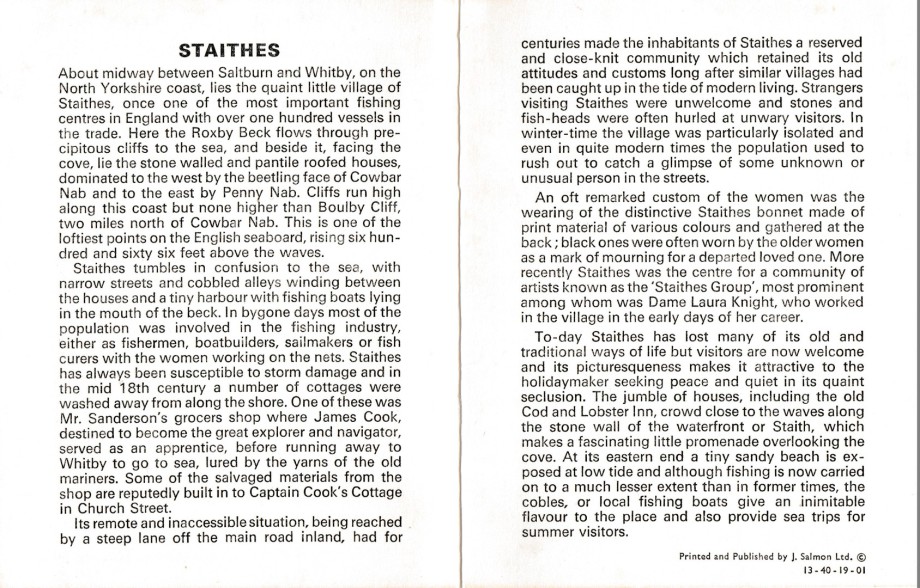 THE INSIDE ‘INFORMATION’ PAGES OF THE 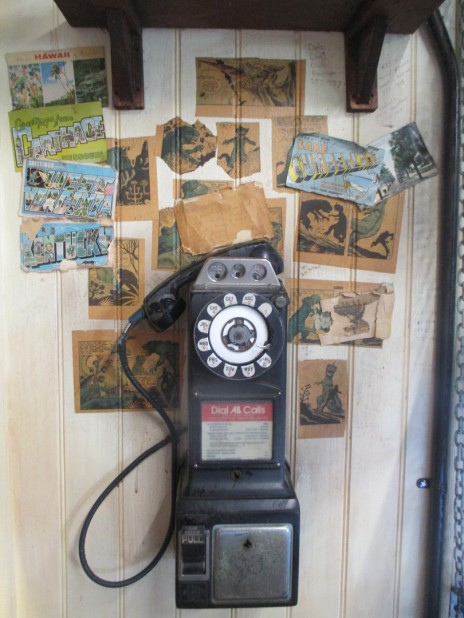 This photograph I took last year. This is in a shop in the Dinosaur area of the theme park. It is not a working phone but a piece of decoration (for those who know the Disney parks this is a piece of Disney Imagineering). I loved the way they placed postcard images around this wall mounted old phone. 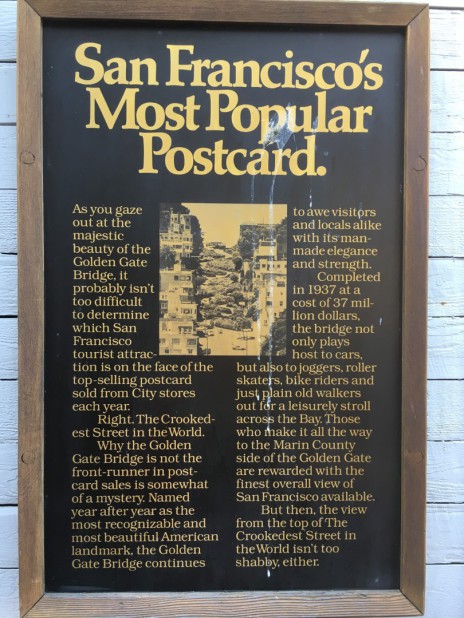 Last year I had a holiday where I crossed America by train. My final stop was San Francisco, and like many tourists I visited Pier 39. Here I found this interesting information board, so I took this photograph. 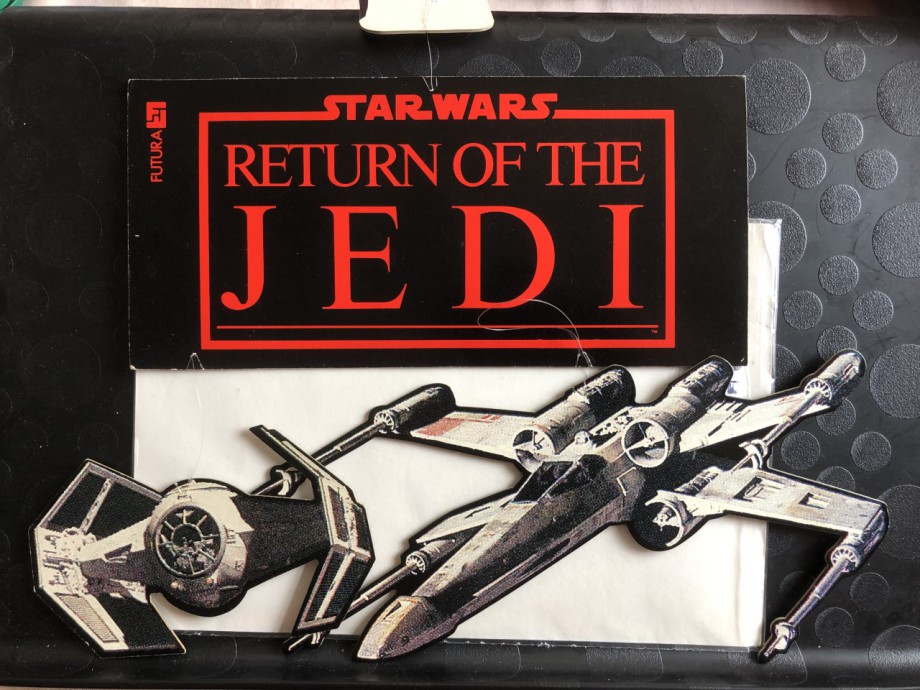 RETURN OF THE JEDI

I get this at Comic Con. I cannot resist anything related to Star Wars, especially anything paper or card related. I came across this hanging display item on a stall for £5 and had to have it. The sign at the top is double sided, as are the space ships, and is at the top of the display. The two ships are an X-Wing and a Tie Fighter. This is unusual and I love it. 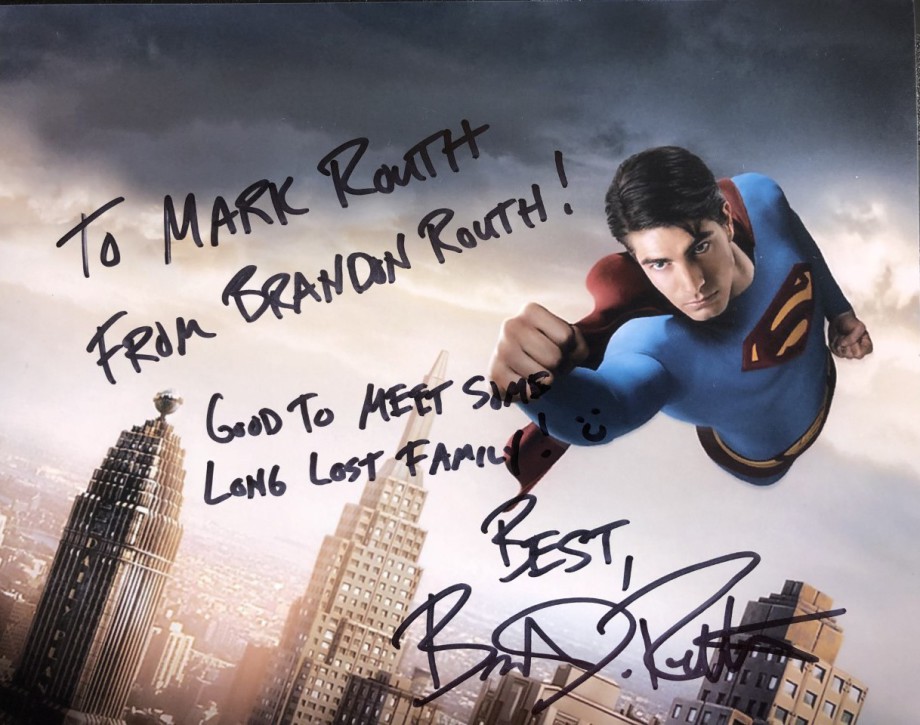 Autographed on the front by the actor

I had the pleasure of meeting Brandon earlier this year at a Comic-Con event. Brandon is perhaps best remembered for playing Superman in ‘Superman Returns’.

You may notice that we have the same surname. After a very brief discussion it became clear that we are related. We took a few photographs and I got this signed and dedicated photograph for my collection. Its not a postcard, but then if you are a collector then you always end up with items of ephemera other than those which fit into your main collection