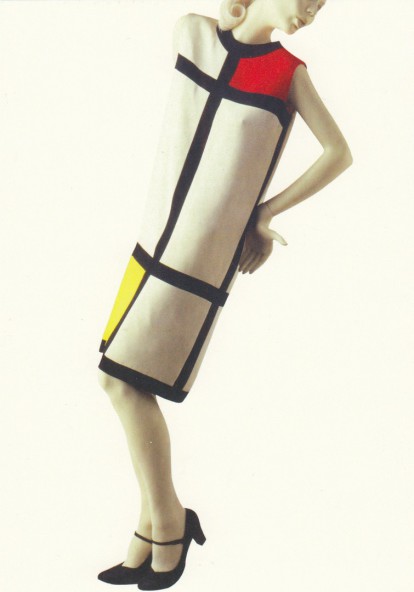 One of the many items of clothing held in the museums extensive clothing collection. 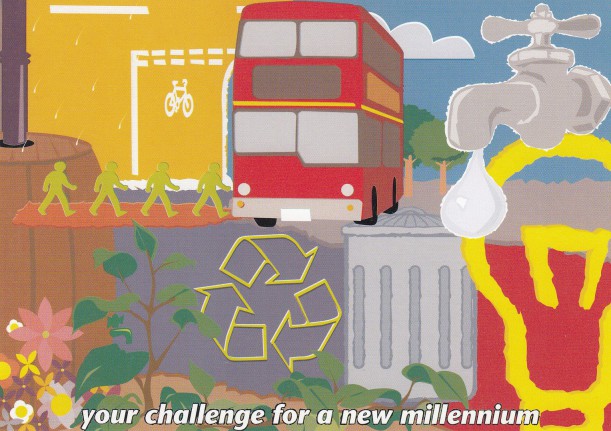 “ARE YOU DOING YOUR BIT?”

It is interesting that at the turn of the last century as we crossed into the new millennium that the push was on to try and get the population to recycle more. This drive has continued-on through the subsequent years and it could be said that there has been some success – I hope that this postcard at least contributed to this new enlightenment. 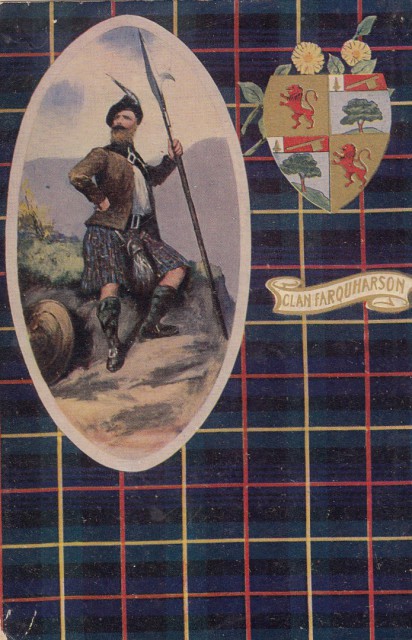 There has been an ongoing fascination with the tartans of the many Scottish clans and this has resulted in a range of postcard sets featuring these tartans. When I visited Scotland in 1995 there was even a modern series, quite a large one, which I remember seeing, although I only bought a couple of examples as buying the complete set just was not affordable to me at that time. This is a much older one, my example here was posted in 1908. Each of the cards in this series has a detailed history of the depicted clan on the reverse side (see below for this cards text). I found this card in a 50p box earlier this year. It is a nice example of the type. 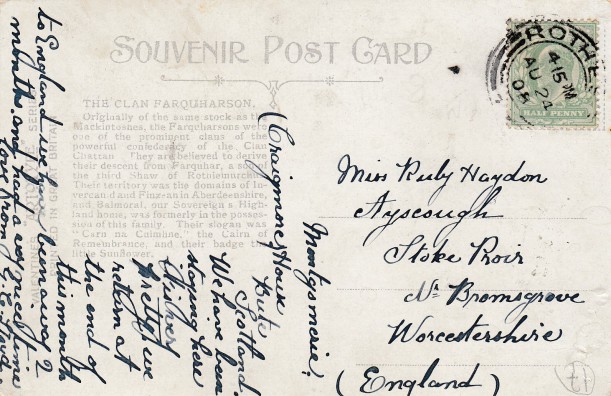 I do like the way that the sender has written their text around the area of printed information on the back of this card thus allowing the receiver (and many years later myself) to read it.

FROM REVERSE SIDE OF ABOVE POSTCARD 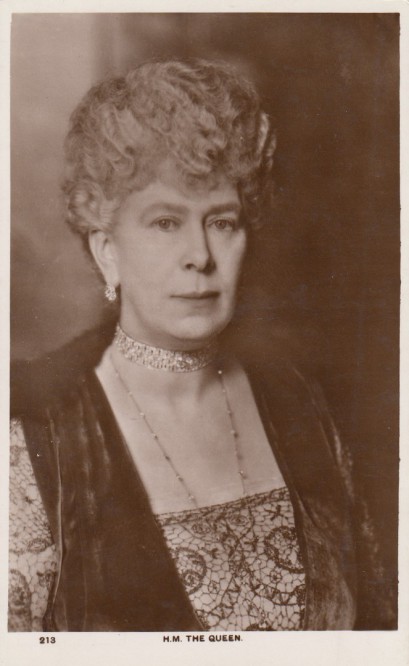 This postcard depicts Mary of Teck (1893 – 1953) who was Queen consort of the United Kingdom and the British Dominions and Empress of India through being the wife of King George V. Although she was technically a princess of Teck, which was in the kingdom of Wurttemberg, she was born and raised in England. 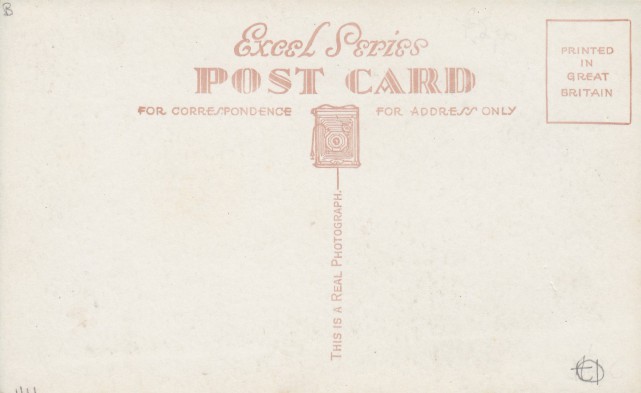 REVERSE SIDE OF ABOVE ‘DECEMBER’ POSTCARD 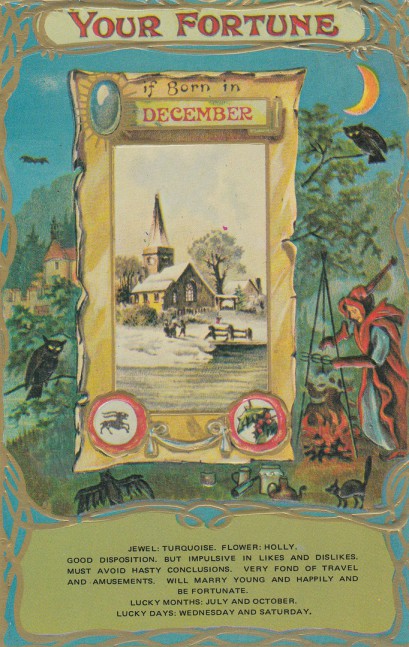 REPLICA MONTHS OF THE YEAR

These reproductions were published by:

I picked up these cards for just 20p each at Bury St Edmunds at a postcard fair earlier this year. They were in a big box of cards, but I could only find eleven postcards, so I am one missing, but I liked these so much I still bought the ones I could find. I suspect my chances of finding the last card are slim, but I shall enjoy looking for it regardless. I liked these because they are well produced, issued in America (so clearly someone has bought these to the UK at some point) and each design has some embossing on it which adds a little novelty value, something which I always find interesting.

Here is the December card, and below this are the other ten which I picked up – it is the October card I am missing (let me know if you ever see this one) 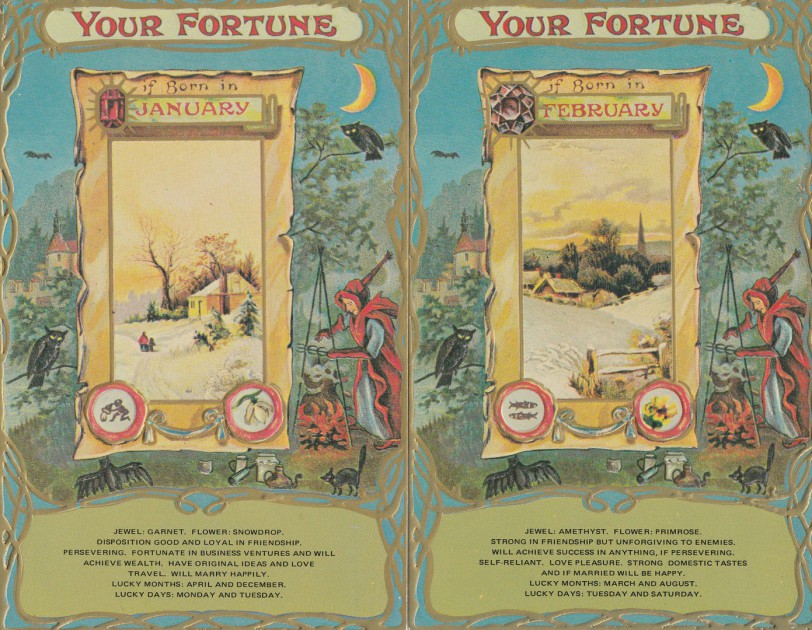 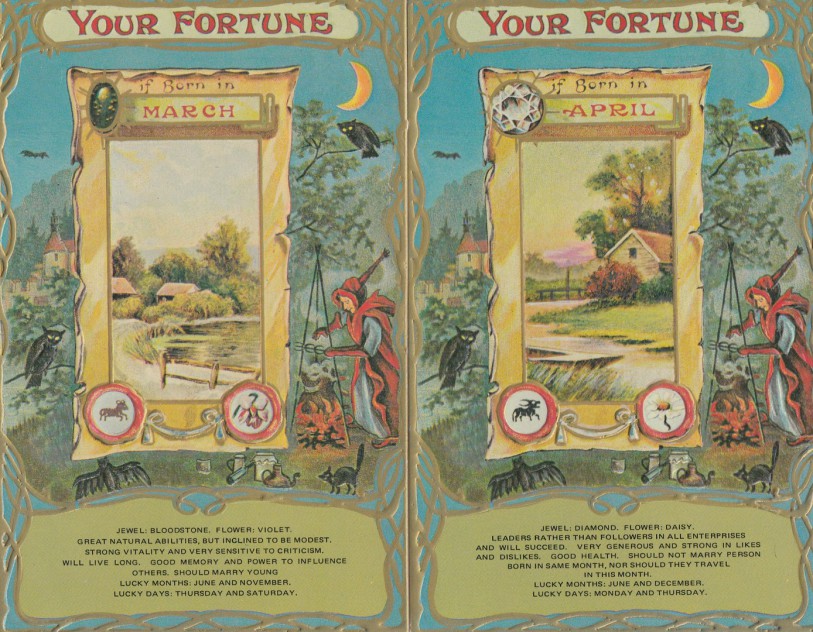 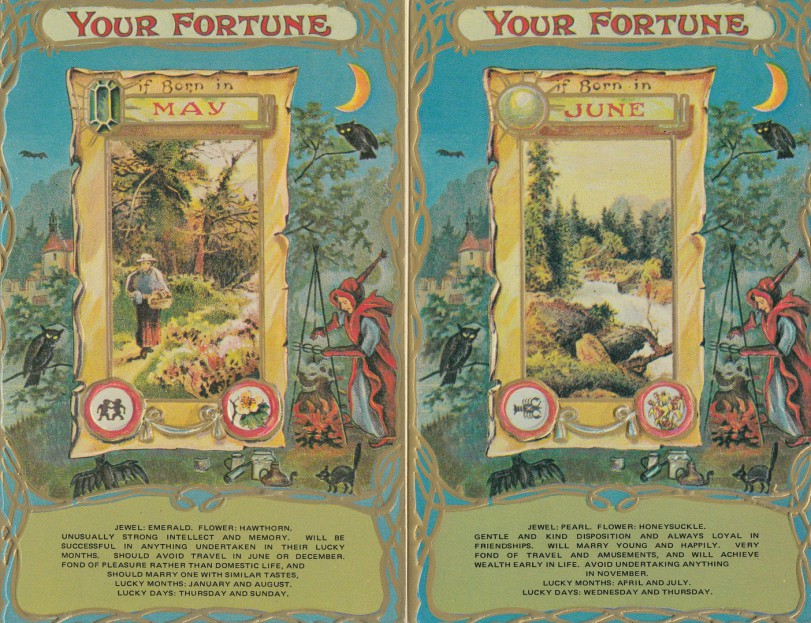 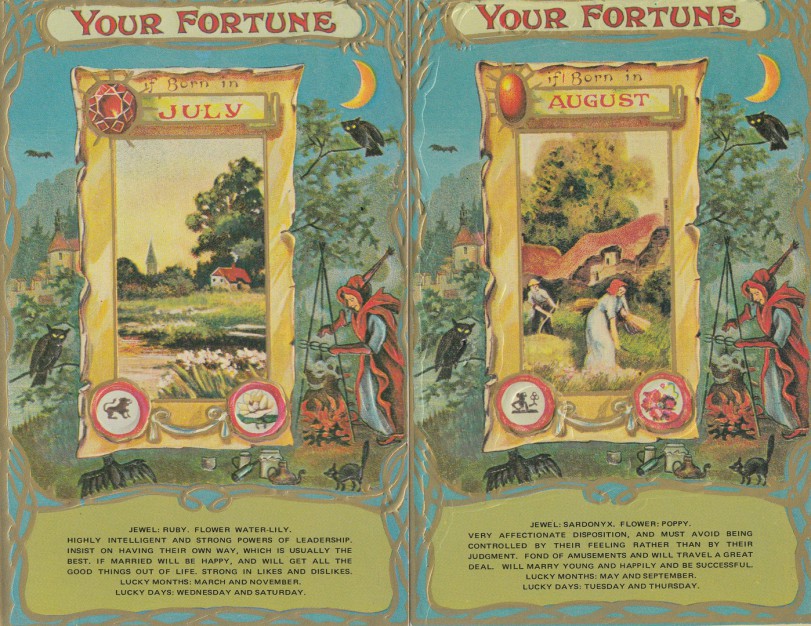 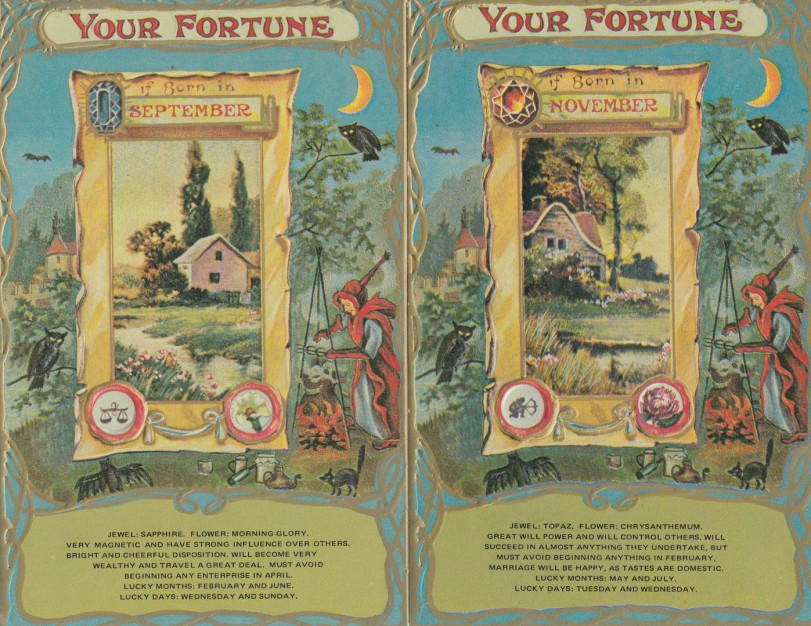 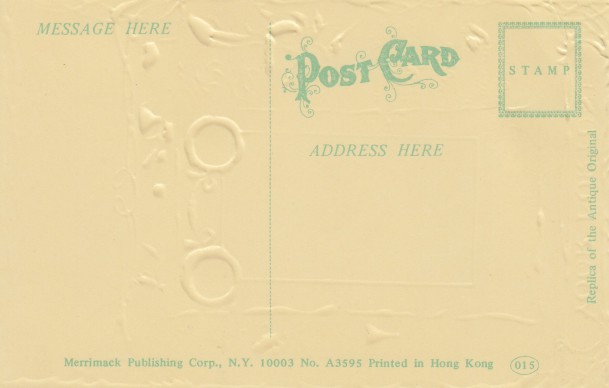 REVERSE SIDE OF ABOVE ‘DECEMBER’ POSTCARD

I am back in the UK having flown out of Florida last night (two hours later than the official departure time, but that seems to be happening more and more these days at airports!). Our last full day in the Walt Disney World was spent in the Magic Kingdom park, and we did visit Tom Sawyer Island using one of the rafts which can be seen in the foreground of this piece of concept artwork. These concept artwork postcards were the first official park postcards and were available before the park opened officially and during its early opening period. On eBay these are quite expensive, often $10 - $20 depending on which one. Being a big fan of Walt Disney World I have tried to pick up as many of these as I can because I think they are the best Disney World cards produced. 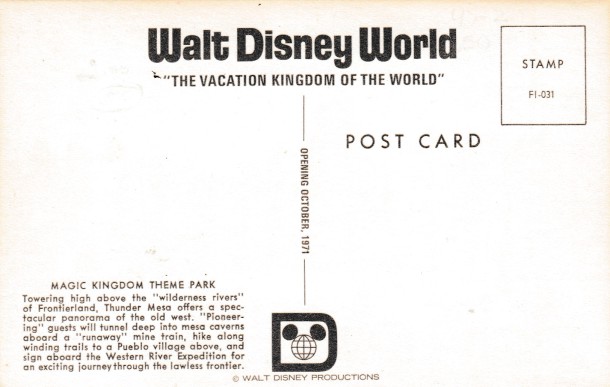 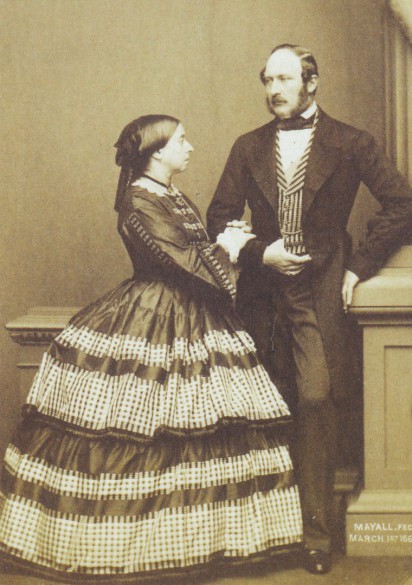 THE QUEEN AND THE PRINCE CONSORT

I don’t think I have seen this photograph on postcard before which may be explained by the fact that the museum has it in their collection, but it would depend if they have the original or an authorised copy of it. Many of the images issued on the museums postcards do not appear elsewhere on card, but not all of them.

This is another good example of a past monarch appearing on a modern postcard and I think it would be fair to say that Queen Victoria is more widely collected than Queen Elizabeth 1 (see previous posting). I think that this is because the Queen Victoria era contains so many innovations and social changes that still fascinate us today, and of course postcards were created during her reign. 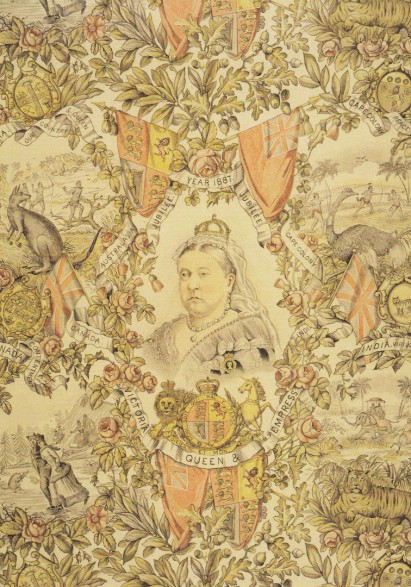 (Given to the museum by the Royal Scottish Museum, Edinburgh)

Another superb postcard from this London museum. A great and unusual royalty themed postcard. I found this to be a really attractive item, although I am not sure I would want it all over my walls! 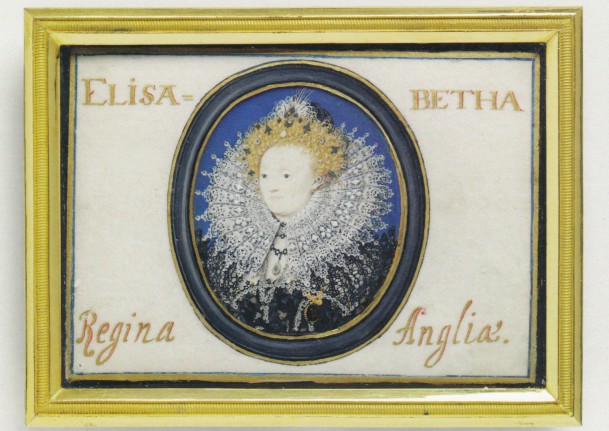 PORTRAIT OF QUEEN ELIZABETH I

There are a surprisingly large number of images of Queen Elizabeth 1 on postcard with many of these coming from museums, stately homes and galleries across the country. This means that they are not generally available without doing a bit of travel. They are not as collectible as current members of the royal family, but I think the images, mostly paintings obviously, are often far more interesting

Not sure if any postings will go on over the next two days (definitely- not Saturday, anyway) as my holiday is coming to an end and Friday is our last full day in Disney World and we have lots planned (which includes packing to head home on Saturday – which is why there will be no posting on Saturday). Full and normal service will resume on Sunday when I am back in the UK and back home.

I have lots of cards from my five-week holiday to scan and put on the webpage and I am looking forward to showing you some of these. 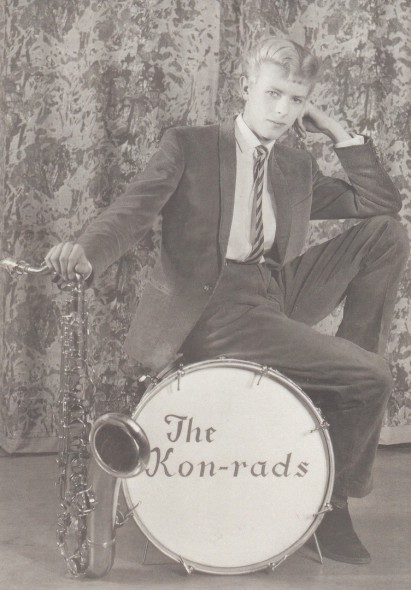 What a piece of pop history. I had never heard of the Kon-rads (a clever band name I must admit), but this photograph, from the year I was born, captures an early part of the musical career of Bowie. Doesn’t he look young here. 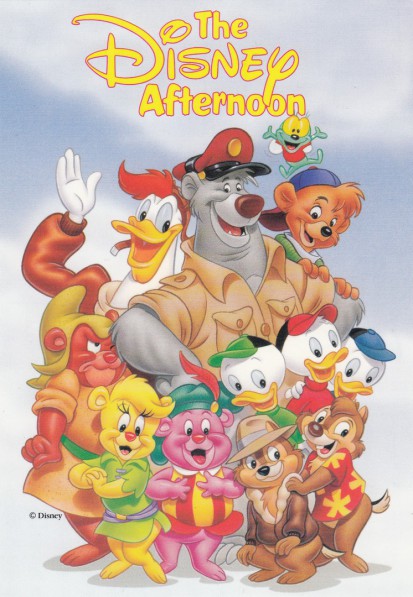 The Disney Afternoon slot was filled with several animated children’s television programmes including: ‘Disney’s Adventures of the Gummi Bears’ (and this card is a rare appearance of these characters on card), ‘Duck Tales’, ‘Chip ‘n Dale Rescue Rangers’ and ‘TaleSpin’ which starred Baloo the Bear as a pilot in a much-updated version of the character. On eBay these cards can cost £5 or more, but if you find one at a postcard show they can be as little as £1 (if your lucky). This card fits very nicely into two of my major collecting themes; Disney and Television. I have always liked this card and am fortunately to have a couple of copies. 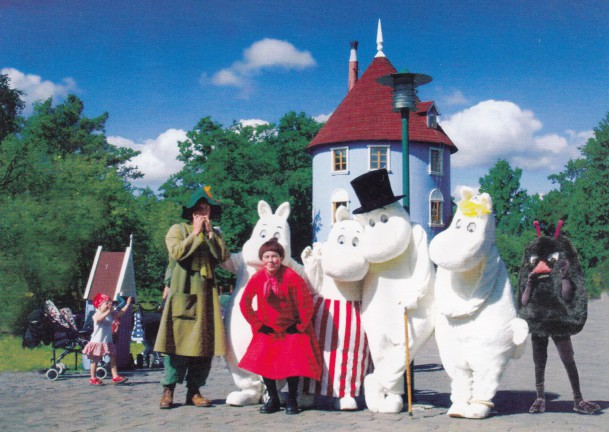 Published for the attraction by

Character theme parks and attractions can give collectors access to some unusual postcards, especially if they visit these, but if not via eBay or dealer’s stands at postcard fairs (where I obtained this one). The Moomins are very popular in their country of origin, Finland, and across the world – there is even a Moomins shop in London. 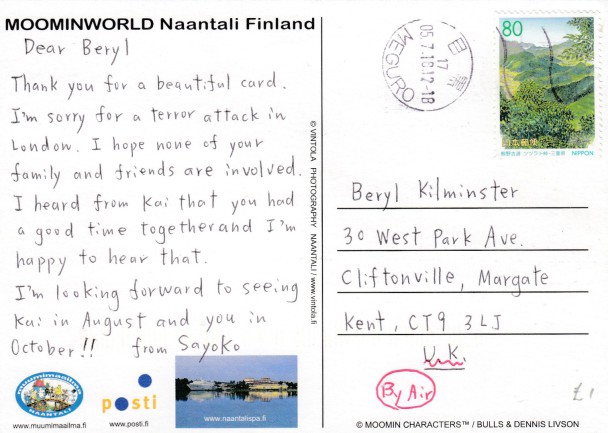 So, here we have a postcard from an attraction based in Finland, posted from Japan to an address in the UK! This postcard has really travelled!

I also found the message, relating to the terror attack in London, interesting and historically topical. All in all an interesting usage with a nice Japanese stamp. 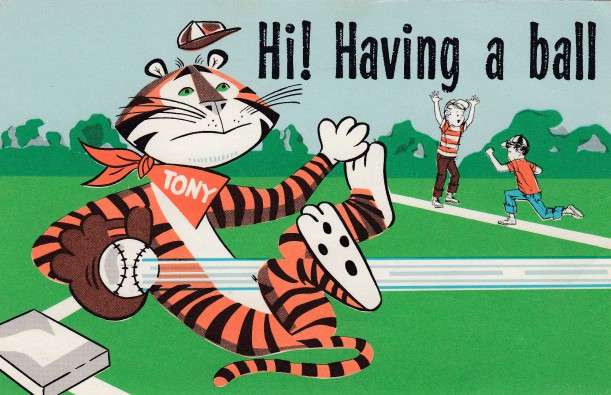 HI! HAVING A BALL.

This is a fabulous older Kellogg’s Tony the Tiger postcard from the US. Tony appeared on the packets of Frosted flakes for many, many years and in the television adverts that promoted them, but there has been a bit of an issue recently re the sugar content in these and there is a chance they will change name or be stopped, at least here in the UK. I have certainly not seen any TV adverts for them for a while, but I think this is going to make all these old Tony postcards far more collectible than they already are, not they are cheap now at £6 to £12 each depending on condition and the design. Look out for these as they are not common in the UK and buying them in from the US can be expensive when posting and packing is included. I was amazed to pick this one up at the last Woking Postcard Fair and was happy (delighted in fact) to pay £6 for it. 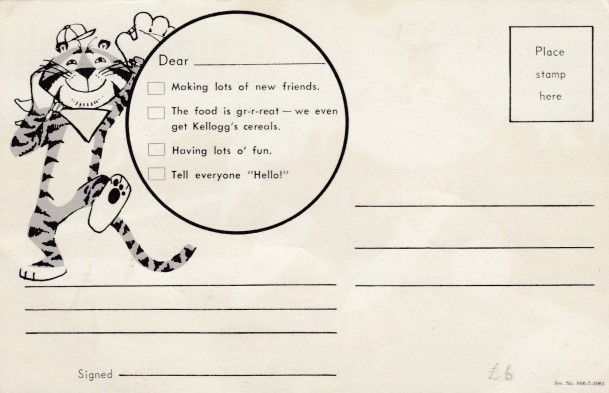 Tony appears again in what is a smashing reverse layout 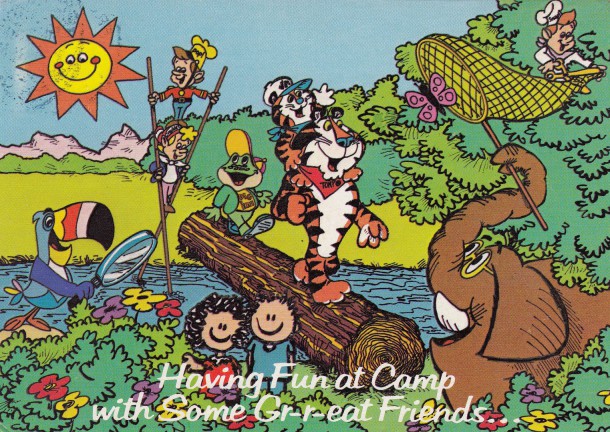 HAVING FUN AT CAMP

This is a more recent Tony the Tiger depiction than others which I have previously depicted across the website. It is another camp card, designed to be sent out by young campers, as this one here was. It is also another postcard produced and issued in America, and not available in the UK, so to get your hands on one here in the UK you will either have to obtain one through an American sale, probably via eBay etc., or be very lucky like me and come across one on a dealer’s stand at a postcard fair.

This design is more unusual than earlier such cards as it includes the Snap, Crackle and Pop characters from the ‘Rice Krispies’ packaging and advertising (I was always a Rice Krispies kid and ate these for breakfast as a child). The Toucan on the far -eft side is Toucan Sam from the ‘Froot Loops’ packaging although I am not sure we have Froot Loops in the UK – or do we? I am ‘fairly’ sure I have not seen the toucan on any advertising here in the UK, in fact until looking at this card and wondering who the toucan was and doing some internet research I had no idea who this toucan was! The toucan added some interest for me. 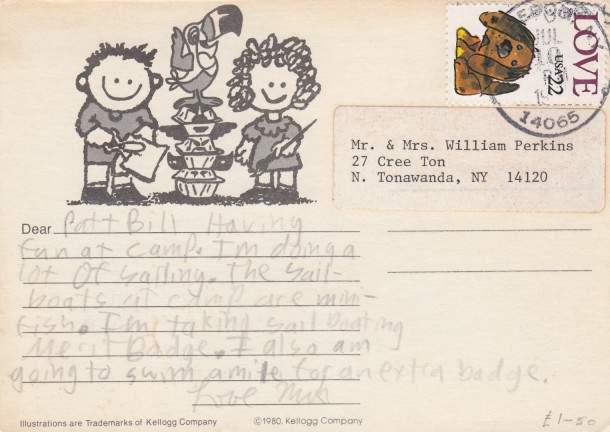 The Toucan appears again on this side 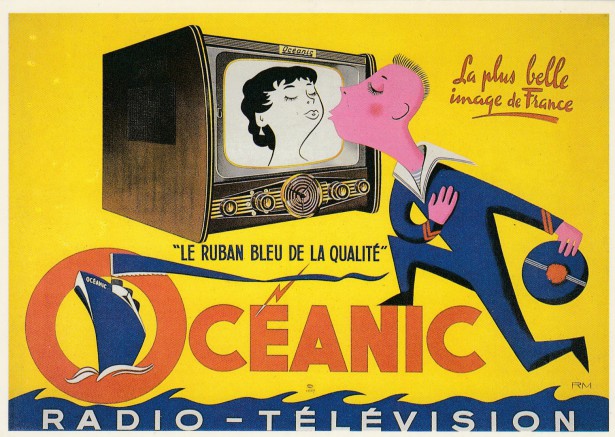 What a cracking advertising image, and one which was obviously going to appeal to my ‘Television’ collecting instincts. This one was published in France (no surprise there!) by the well known and famous French postcard publisher Editions F. Nugeron. This was a recent postcard fair buy which I was ‘really’ happy to obtain 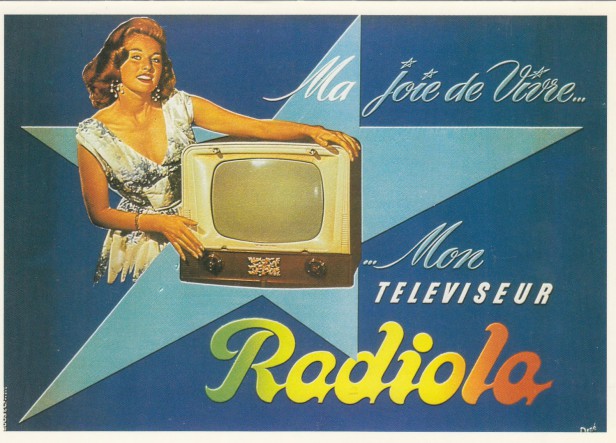 This postcard is clearly from the same series as the one depicted above. It is another cracking French television advert. These are the type of postcards I really like adding to my television themed collection as they are often hard to find here in the UK and any foreign TV related postcard is always worth picking up. 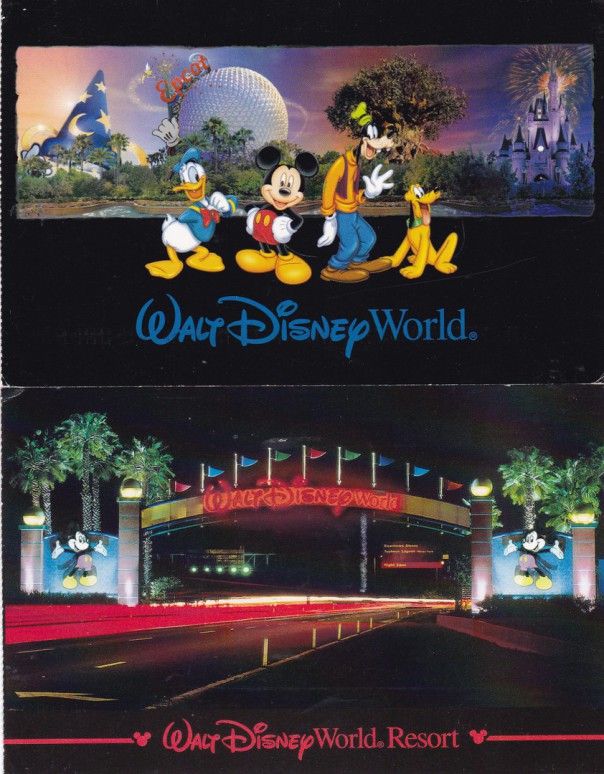 (Both have perforation edges down the left-hand side)

Welcome to a world filled with magic!

In my early visits to Walt Disney World I used to see the postcard books, from which these cards have been taken, on sale around the park, but has been some years since I last saw anything like this. I have a mint book somewhere in my collection, and they turn up on eBay occasionally, but I rarely find used single cards from these books posted properly, as they are designed to be. I have always suspected that most of the books are saved as souvenirs of trips to the theme park. These two cards here though have been used. 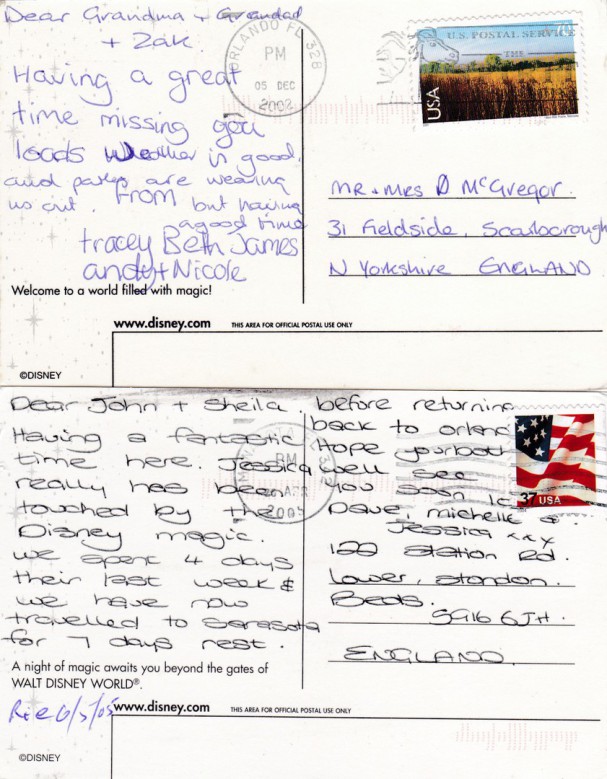 REVERSE SIDES OF ABOVE TWO POSTCARDS

Posted from Orlando to England in 2002

Posted from Manasota, Florida in 2005