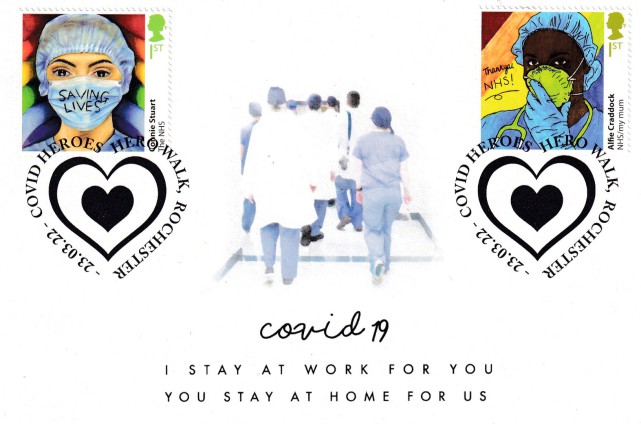 I STAY AT WORK FOR YOU

YOU STAY AT HOME FOR US

(My personal copy which I had used with two of the Royal Mail ‘Covid Heroes of the Pandemic’ issue from the 23rd March 2022 – possibly, probably even, unique usage) 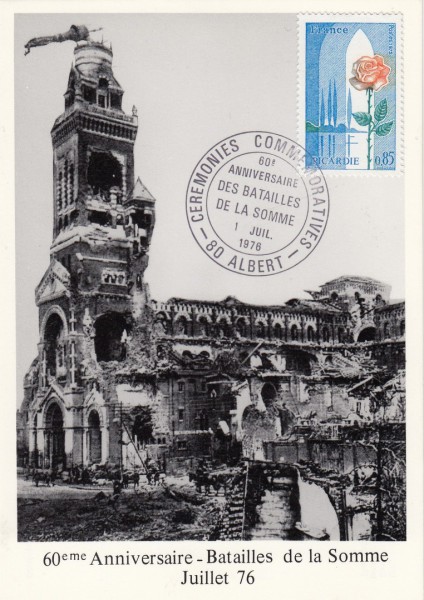 60TH ANNIVERSARY OF THE BATTLE OF THE SOMME

THE BASILIC [Albert] AFTER THE FIRST BOMBARDEMENTS (1916)

Today is the 106th anniversary of the first day of the Battle of the Somme in the first world war. On that day the British forces, with their allied armies, lost around 60,000 men (the official figure seems to be 57,470 casualties, with 19,240 men killed – although different books and records show slightly different figures, although it must be said that none of these make easy reading).

I have visited Albert and have seen the rebuilt Basilic with its bright gold statue at the top, which for many prior years I had seen in the distance whilst on earlier WWI battlefield trips. It was not until Jo and I made a visit on our own that I got to go into Albert and get a look around the town.

This 1976 maxi-card is a great card and one which I have as a memento of my visits to the Somme battlefields. 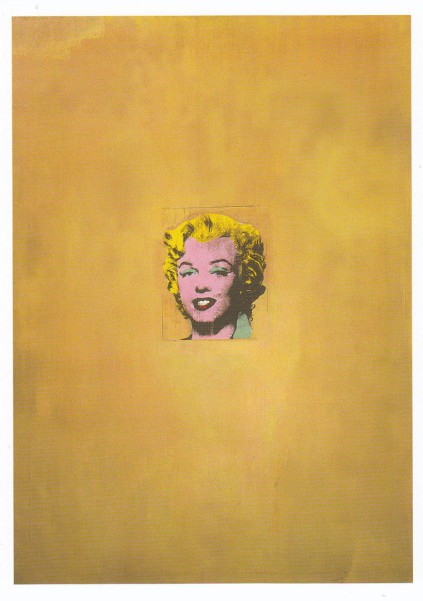 Published by (and sold at)

THE MUSEUM OF MODERN ART

I saw this painting, or silk screen print if you prefer, on my visit to the Museum of Modern Art (or MOMA as it is called locally) back in February 2020, just a month or so before everything turned upside down and we ended up in a pandemic.

I have always been interested in art, especially more modern era artwork and I did art at school as one of my exams (I did OK). So, wherever I am I like to visit art galleries and I can highly recommend this one if you find yourself in New York anytime and you want to see one of the best collections of modern art available (although Chicago has a great gallery as well). 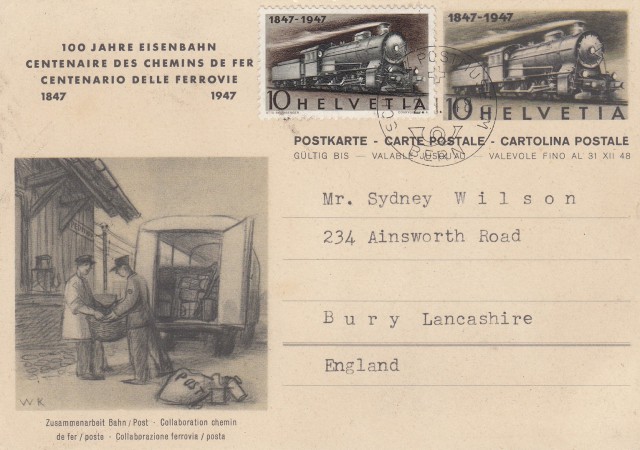 A nice postally used special anniversary of the railways, 100 years, from Switzerland where the sender has had a copy of the actual stamp, same as the printed version, applied which I think enhances the look of this lovely card. 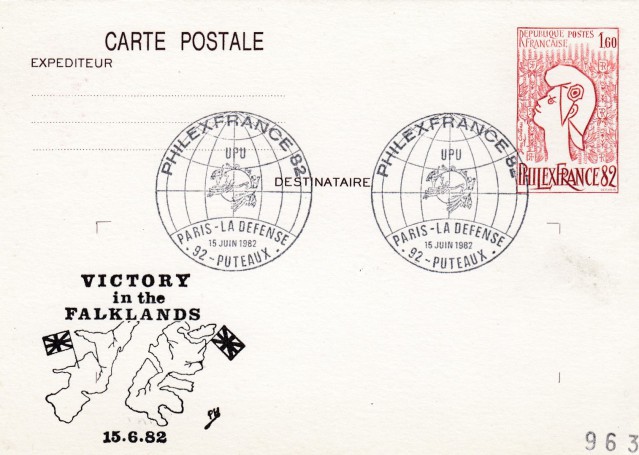 VICTORY IN THE FALKLANDS WAR 1982

“VICTORY IN THE FALKLANDS

The surrender took place on the 14th June 1982 but so late in the day that news was not reported worldwide until the 15th June which meant many postal related items, like this card, were dated the 15th. This is an unusual item but quite a few were produced, and it was ‘fairly easy’ to obtain for many years, although a little more so in the past few years (but it is still a relatively cheap card at anything up to £5).

As today is the 40th anniversary, officially, I wanted to post an appropriate card but also something a bit different. 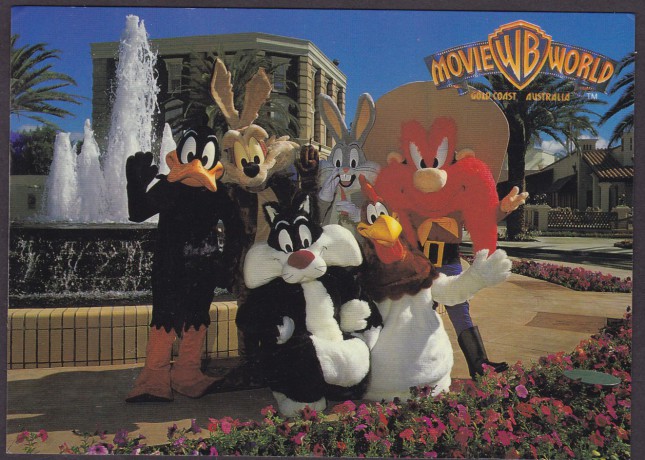 “Hollywood on the Gold Coast”

I like unusual television related postcards and pick them up whenever I come across them on dealers stands. This one appealed as it is somewhere I am probably unlikely to be able to visit (although we have considered visiting Australia as we do have some friends and family living over there, you never know). As people who have followed me through the years will know, I do love theme parks, especially Disney ones, so this card also appeals on this front as well.

The characters depicted are not named on the card, but they are, from left to right: back row, Daffy Duck, Wile E. Coyote, Bugs Bunny, Yosemite Sam, then below we have Sylvester the cat and Foghorn Leghorn.

This card was posted to the UK from Australia in 1994. 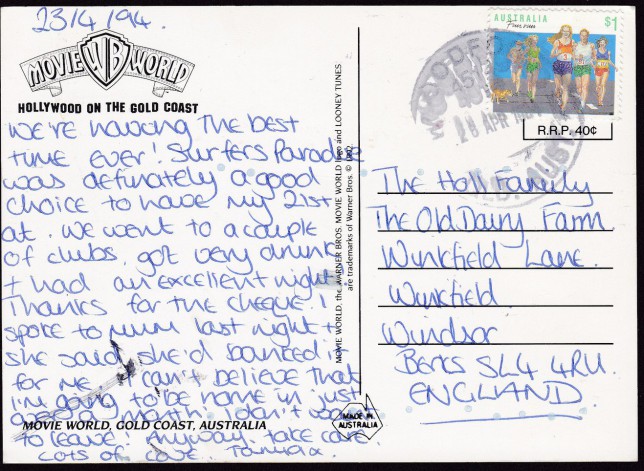 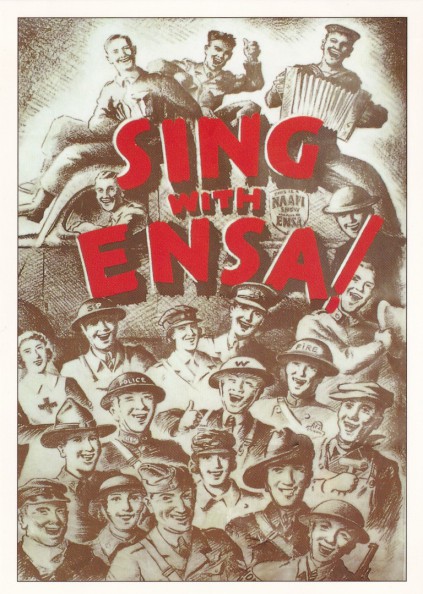 I think this is a great image and I love the fact that Robert Opie issues images of such unusual items as this ENSA poster. ENSA stood for the Entertainment National Service Association which was established in 1939 not long after the UK declared war on Germany during the opening gambits of the second world war. Started up by Basil Dean and Leslie Henson the association was designed to provide entertainment for all the British armed forces personnel who were shipped around the world taking part in combat. It is nice to see a modern postcard that represents this great organisation. 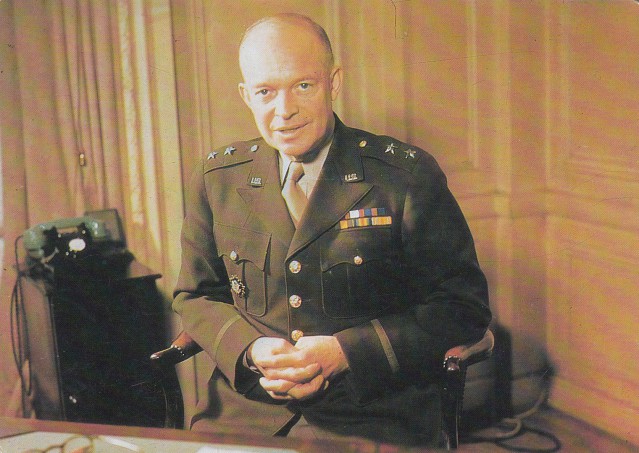 Yesterday was the anniversary of the D-Day landings in Normandy during World War II. General Eisenhower was the overall commander of operations and had a great deal of pressure placed upon him. It is known that he pre-wrote two announcements, one advising of the success of the landings on German occupied France and one which he would read out if the landings failed, which he knew would also have meant a great loss of life on the allied side. Fortunately, and partly due to his superb and calm handling of the planning, the landings were a success. 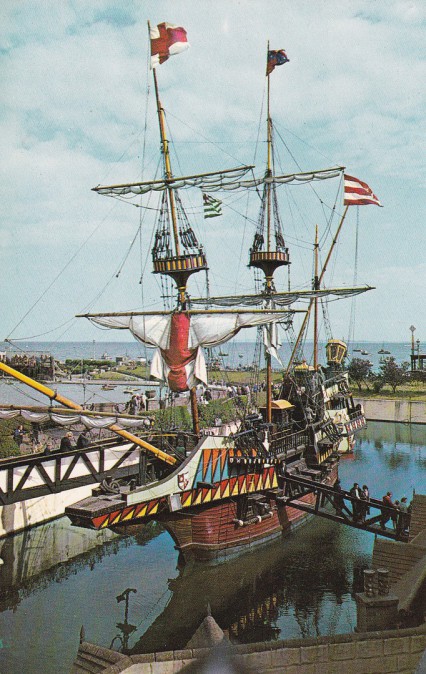 I remember this well and walked around it several time as a child. I also sadly watched it being dismantled as an adult. A building now stands here, an amusement arcade. Postcards like this can evoke memories and I think this is one of the things I like most about them. Other postcards depicting this attraction appear elsewhere on this website. 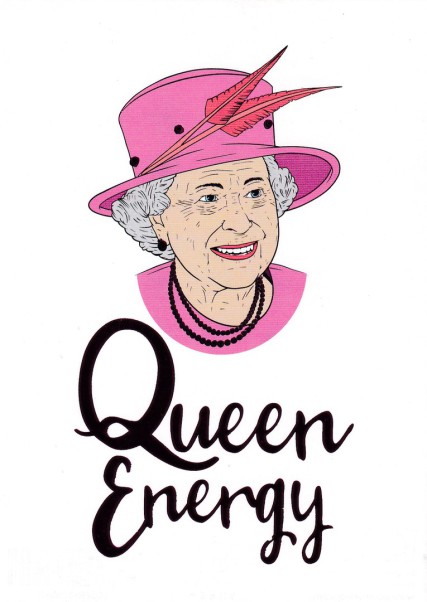 TO HER MAJESTY QUEEN ELIZABETH II 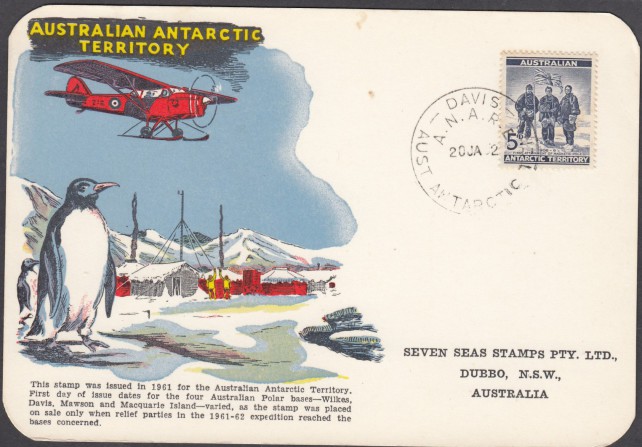 “This stamp (as applied to this card) was issued in 1961 for the Australian Antarctic Territory. First day of issue dates for the four Australian Polar Bases – Wilkes, Davis, Mawson and Macquarie Island – varied, as the stamp was placed on sale only when relief parties in the 1961-62 expedition reached the bases concerned.”

Although a plain backed card this has much interest due to the story behind the use and issue of the applied stamp, the story of which is given above. This card was obviously posted from the DAVIS polar base in 1962 showing that although the stamp was produced in 1961 it took a little while for copies of it to reach the DAVIS base. Antarctic postal history is very collectible, even modern material like this. 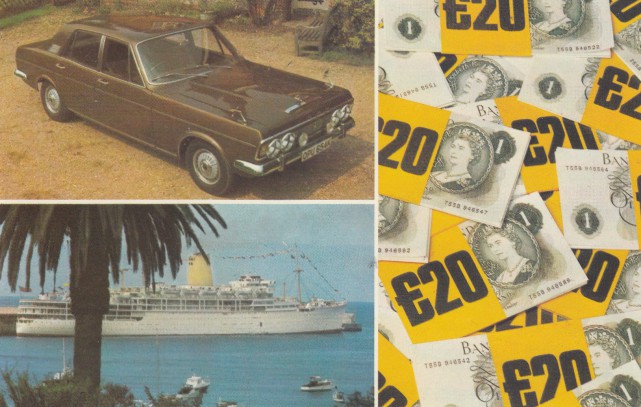 LUCKY NUMBER WEEK (IN YOUR AREA)

These postcards are collected by advertising collectors although I think you also have a nice car image and an ocean liner depicted which opens the card up to other collectors. These cards have been popular for years and although once ‘fairly easy’ to pick up they have become much harder with time. This card was posted out in 1972 using a proper stamp (before the days of pre-printed stamp marks – and these cards, from this period always come with real stamps). The message on the reverse side is printed but has the look of being handwritten (something experts realised made it far more likely that the receiver would read the message – clever marketing, still used to this day by some companies).

Lastly, does anyone know which ship this is depicted here? 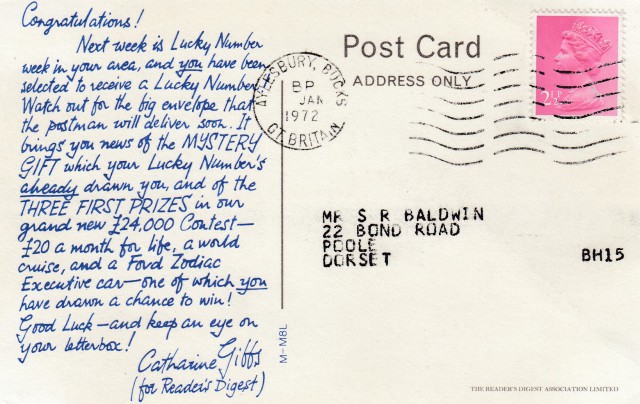 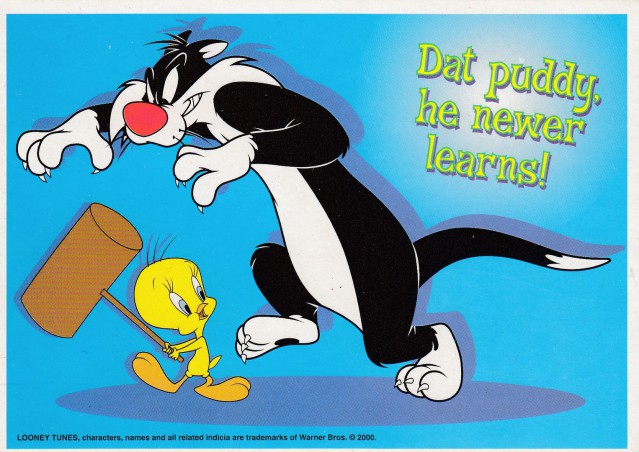 I love the postcards that came in the’ LUCKY BAGS’ bags, which were bags of small toys and paper games mixed with some sweets and for awhile a postcard in each. The problem as I have mentioned before here, is that you could not see into the bags to see which postcard you were going to get. So, when I come across these on dealers stands, as I did with these three, I always pick them up as I think they are much harder to source than many people believe. Most were destroyed by the kids who were bought the bags. These three I picked up at a Nottingham fair last year (probably the first post pandemic lockdown Nottingham Postcard Fair). I had not seen them before. 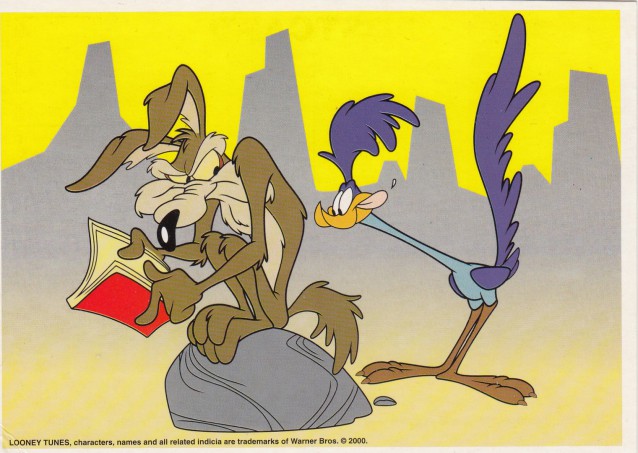 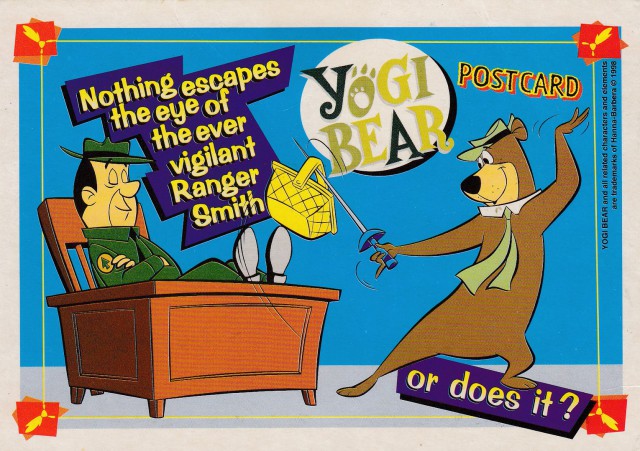 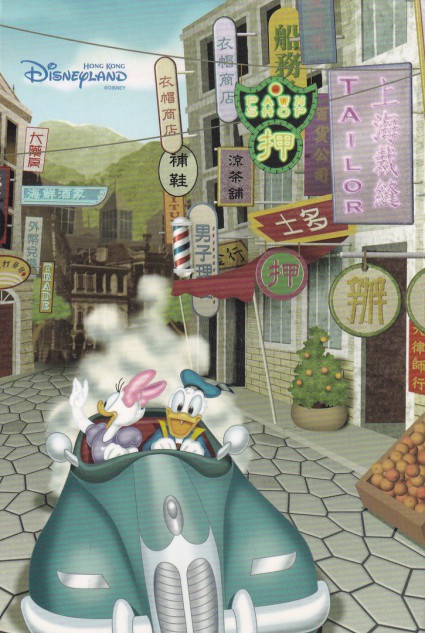 I don’t have many postcards from this Disney Park, and I have not yet had the pleasure of visiting it, but I am aware that they have produced a number of great postcards, something all the Disney parks were, and some are still, well known for. This one was posted to the UK from Hong Kong in 2007 by someone who writes that they had just visited the park, so I assume this card was bought on that trip, which nicely dates the card for me. Used cards from the Disney Parks are always useful for giving a good idea of when the card was on sale, and if you have more than one, how long the card was on sale for. This card is another of the cards bought recently at the last Nottingham Postcard Fair. 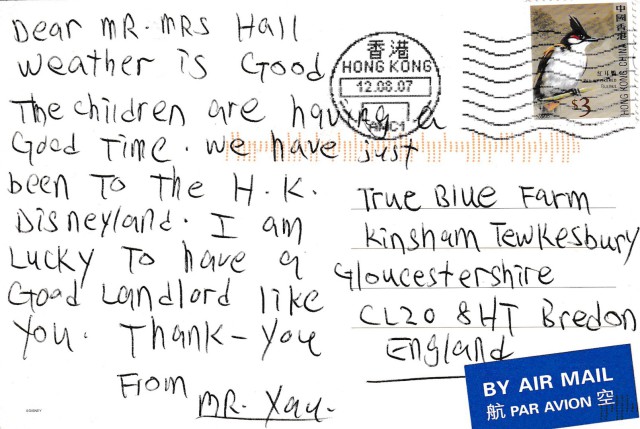 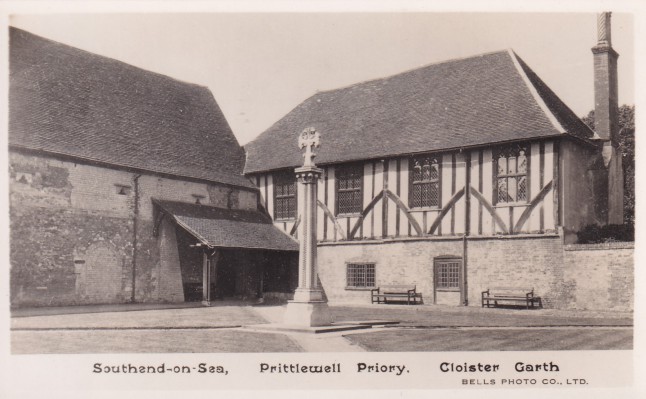 This may not look like much of a postcard for many, but if you live in the Southend-on-Sea area, like me, then there is every possibility that you will have seen this building and perhaps played around it as it is in one of, if not the, largest local park. As a kid I regularly visited Priory Park, named for the very building and priory that was located here. The building is now a museum and I have very fond memories of this building and the park it is still located in.

This is another postcard that I picked up at the Nottingham Postcard Fair this past weekend. It was only 75p but the memories it evoked as soon as I saw it meant it was coming my way even if it had been priced higher. 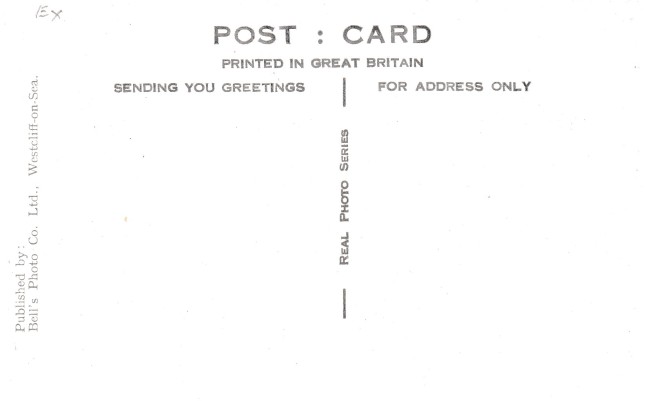